Time is winding down in a Catholic Conference showdown between host Xaverian and Catholic Memorial, with the game tied at 1. Xaverian’s Matty Ryan chases down a CM rush and breaks up the play with a nice backcheck inside the far blue line, sending the Hawks in transition the other way.

Ryan Pomposelli skates the puck into the offensive zone and wrists a long shot on net that is stopped. The rebound gets chipped to the left boards, where Ryan quickly tracks it down. Spinning on his skates, Ryan fires a no-look pass completely across the ice to the far right faceoff circle, where Pomposelli is lurking unchecked. Taking a bit of a backward stride, Pomposelli unleashes a one-timer that rips past a helpless Knights goaltender into the net.

Pomposelli and Ryan quickly are swarmed by their Hawks teammates, who come flying off the bench and set off a big celebration in front of their jubilant fans at the Canton Ice House.

That the overtime victory doesn’t officially count for standings, or anything else in the grand scheme of things, doesn’t seem to matter. 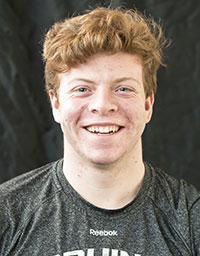 In an era when many players leave high school hockey early in pursuit of perceived greener pastures and chasing the dream of playing in college, it was moments such as the game vs. Catholic Memorial that made it an easy call for both players to return to Xaverian and play their senior seasons with the Hawks.

Longtime Xaverian coach Dave Spinale was aware early on what he might have with Pomposelli and Ryan.

“We always knew from the middle school coaches that they would be tough to stop,” Spinale said, before adding the inevitable follow-up question would be, “How long can you keep them?”

For both players, the answer was the same.

“My thought process was, when I came here in seventh grade I was going to stick with it,” Pomposelli said. “No matter how many options I had to go elsewhere, I love the program here, I love the sport, I love the kids. There’s no better feeling than playing here.” 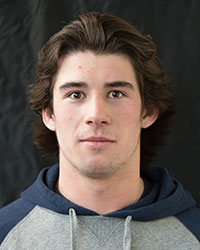 Added Ryan: “I don’t think there was any doubt that I was going to come back. I obviously have been here for a good amount of time and I want to finish out my senior year strong. So I decided to come back. I feel Ryan is the same way because we have a good team this year and we know we can make a good run.”

Ryan and Pomposelli. Matty and Ryan. Their names weave together as seamlessly as their games, even though more often than not this season they aren’t even on the ice at the same time.

“To have them on the ice together 5-on-5,” Spinale said, “we always say there’s only one puck.”

But he doesn’t mean to imply either player is one to try to hog all of the action. It’s more a compliment to both, because while they complement each other well, there is a lot of similarity to both Ryan’s and Pomposelli’s “heavy” games.

Spinale calls Pomposelli a “shoot-first” type while Ryan is a better passer, but the Hawks coaches always look to get more of the other out of each. In the end both are strong at possessing the puck, so frequently splitting them up spreads things out and potentially makes the Hawks that much tougher to defend.

Nonetheless, there are times when both will be on the ice, as was the case with Wednesday’s final sequence. That’s when years of playing together, or even against each other, pays off.

“Just over time, you start playing together for so long and you pick up that little click,” said Ryan, who is from Milton. “You start making the passes that you would be used to making, and people are at the right spots when they needed to be. Over time it’s developed into something really good.”

No surprise that Pomposelli, who is from Needham, agreed.

“He and I have played together since we were in middle school, through the program here and with our select teams. We’ve grown up playing against each other and then as of late we both came here and played together,” Pomposelli said of the chemistry with Ryan. “I’d say it’s there a lot. At times we butt heads like any brothers do. I consider him a brother to me. I take his opinion really seriously and he takes mine. We’re always talking to each other, looking to make things better. I think that’s helped grow our chemistry over the years.”

Having two seniors so experienced and talented has been a boon for Spinale and the Hawks.

“They love the school, they’re leaders on campus, multi-sport athletes,” Spinale said of his duo, who also play baseball in the spring.

But while neither player has decided on their plans beyond this season, Spinale said there is little doubt hockey still will be prominent in their respective futures. Which made it all the more significant that both came back for a final go-round, just as Hawks standout Josh Barton did a year ago. Together, they led the Hawks on a run through the Super Eight tournament that fell just short with a loss to BC High in the consolation bracket final.

Needless to say, that sense of “unfinished business” spurred both players in the offseason. The Hawks entered the weekend with a 6-1-3 record and in the thick of both the Catholic Conference race and early Super Eight conversation, heading into Saturday’s key league battle with St. John’s Prep.

“I try to talk to Josh as much as possible. I’m trying to win it for all the guys who have been here before,” Pomposelli said. “Being so close just to get to the Garden, the guys returning know we want to get there and we want to win it. We feel like we have the team to do it.”

Added Ryan: “When you get to that third spot and you’re one game away from the Garden, it’s just something different. You’ve just got to piggyback off that this year and that’s what we’re trying to do. Hopefully we make another run like we had last year.”