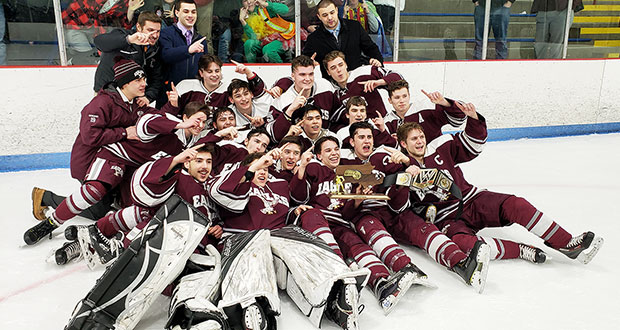 Brian Duda and Chris Tenczar scored two goals each for the Eagles. Easthampton, which was a pedestrian 10-7-3 during the regular season, peaked at the right time for the second time in as many years.

Vaughn Gillen had both Belchertown goals.

Easthampton will meet the winner of the Sunday’s Central Mass D3A final between reigning champion Lunenburg and Northbridge on Wednesday at 7 at Holy Cross for the state title.

The Eagles raced to a 3-0 first period lead on goals by Duda and Tenczar. Both struck during the second period as the Eagles moved to a 4-0 advantage.

Gillen cut the deficit to 4-1 with his late second period tally. Gillen scored at 8:44 of the final period before Jacob Batcherold sealed things with an empty-net goal with 0.4 seconds remaining. Belchertown finishes at 14-4-3.

A moment of silence was held before the game for Belchertown player Brendan Conroy, who died following a car accident earlier in the week.