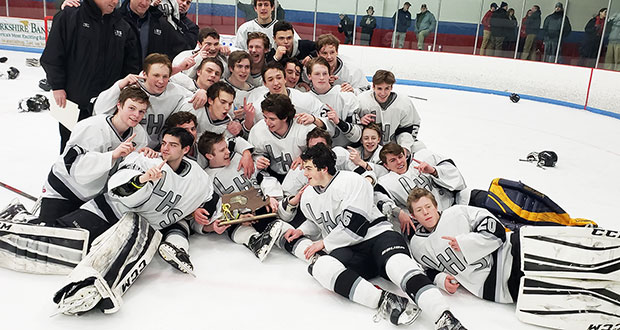 This time, Longmeadow lived up to its top seed billing.

No. 1 Longmeadow ended No. 3 Westfield’s three-year championship reign as Jack Barron registered a hat trick to power the Lancers to a 5-1 triumph over the Bombers Thursday in the MIAA Western Massachusetts Division 3 championship game.

Barron also had an assist. He has 199 career points.

Longmeadow (15-5-2) advances to Tuesday’s state semifinal at Holy Cross and will face the winner of Sunday’s Central Mass. final between Groton-Dunstable and Wachusett.

Westfield (12-8-2) had won five of the last six sectional titles and 13 of the previous 17. But the Bombers could not withstand a four-goal second period outburst by the Lancers that left them with a comfortable 5-1 advantage. Westfield and Longmeadow have combined to win 17 of the last 18 Western Mass. titles.

Westfield nearly opened the scoring early in the game. Ryan Moorhouse hit the post and later left the game with a broken wrist.

Barron opened the scoring 4:08 into the game when he scored off a rebound to give Longmeadow a 1-0 lead. Mason Baron-Pinkowski snapped a shot from the slot into the net 1:29 into the second period as the Lancers took a 2-0 edge. Rob Giampietro tipped in a Barron shot at 5:32 to provide the Lancers with a 3-0 lead.

Scotty Bussell got Westfield on the board at 7:01 to make it 3-1. But Barron scored twice later in the period as the Lancers increased their lead to 5-1.