The defending D1 state champions lost a pair of 100-career point-scorers to graduation, so they will need to develop some scoring from a returning trio of forwards as well as some talented youngsters into the program.

After losing just two seniors from a team that reached the D1 semifinals, expectations are high this winter for the SeaLakers with nine seniors leading the way.

New head coach Courtney Barrett first task is the rebuild the core of this team that suffered several key losses to graduation and prep school. Defense and goaltending project to be strongpoints.

Forwards looking to produce for the Wolves are junior Aly Larose and sophomores Mia Angwin and Reese Bailey.

The Green Knights will be very young. They will need to develop some scoring prowess in what coach Aaron Miller labels a rebuilding year.

Senior Kate Buckley (14 pts) will be a huge part of the defensive group for Rice. A couple of freshmen to keep an eye on are Vittoria Pizzagalli and Kate MacKenzie.

As usual, the Comets will be a serious player in the race for a Division 1 title. Coach Luke Cioffi enters his 21st season behind the bench and has a team that will be on the young side.

A catalyst up front will be senior Meghan Connor (22 pts). A host of youngsters ready to contribute are sophomores Faith Reed and Claire Beauregard and freshmen Kami O’Brien, Jodie Gratton and Maddie Montagne.

A huge strength for the Comets is the return of their dynamic goaltending duo in senior Madeleine Hungerford (7 shutouts) and junior Macie Boissoneault (4 shutouts).

Developing an offensive presence will be key this winter for the Tigers, who lost their top two scorers from last season’s successful squad.

The Wasps reached the Division 2 state title game last winter and are hoping to be there again in 2020. The team did lose a bunch of players to graduation, especially on the defensive side.

Last year’s leading scorer, junior Allie Cimis, moves back to defense for this season where she will lead new sophomore Lily Gubbins and freshman Alix Livingston. A new starter in goal for the Wasps is junior Novah Conway.

It will be a building year for the T-Birds, who have only one returning senior. They will have a lot of team speed.

New head coach Brian Fortin will look to juniors Brianna Parent (20 pts) and Lora Fresn (15 pts) to led the offensive attack. A couple of eighth-graders who could contribute are Bri Jarvis and Emily Airoldi.

On the blue line, junior Abby Bessette is a shut-down defenseman. Eighth-graders Brooke Rainville and Lindsay Gagne will see time.

Junior Madison Conley is a returning goaltender. Eighth-grader Lily Berard is in the mix.

Despite coming off a two-win season, there is a lot of optimism at Spaulding, where coach Dave Lawrence feels his club can improve in a big way with the influx of several talented youngsters.

Sophomore forward Emily Morris is a key holdover for the Crimson Tide.

Newcomers ready to make a splash are sophomore Bria Dill and freshmen Rebecca McKelvey and Camryn Bell up front, and sophomore Zoe Tewksbury and freshman Molly Parker on the blue line.

A good nucleus returns for the Solons, who will focus on team defense and puck possession this season.

Senior Renee Robert (37 goals, 90 career points) will be the go-to forward for coach Larry Smith. Also back in the fold are juniors Cece Curtin and Ali Guthrie, and sophomores Moran Ribolini and Elizabeth Guthrie. Freshman Caitlyn Fielder hopes the crack the lineup.

On the blue line, senior captains Emily Frazier and Jenna Mekkelsen will anchor things. Junior Cadence Burgess is another veteran presence, as is junior Phoebe Osabchey-Brown. Joining the group is freshman Megan Ognibene. 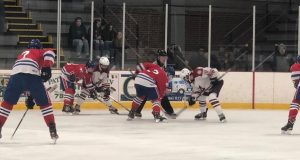