The big news this week in Division 2 is the first appearance of No. 5 Lyndon Institute in the HNIB News Vermont Division 2 Top 5 this season. The team has won four in a row and ultimately replaces Hartford, which it defeated, 4-3. Hartford, in fact, suffered its first two losses of the season to fall from the poll this week.

No. 1 Woodstock was tied by Burr & Burton, 0-0, and beat Mt. Mansfield, 7-0, to remain on top. Why is Woodstock ahead of unbeaten No. 2 Harwood, at least for the moment? Woodstock’s wins have been a bit more impressive and have come against top shelf clubs.

Don’t dismiss Harwood though. While it has only one win against a current Top Fiver (2-1 over Milton), its schedule against the division’s better teams hasn’t kicked in yet. They’ll get their tests soon and, with strong results, should get their due. Unbeaten well into January would be tough to argue against.

No. 3 Milton, as mentioned, fell to Harwood, 2-1, but rebounded nicely with a 2-1 win over Hartford.

No. 4 Brattleboro looked good with an 11-2 win over U-32 and an 8-3 drubbing of St. Johnsbury. Nineteen goals in two games is not so shabby. 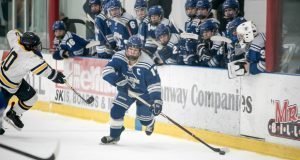