Three In A Row For Duxbury

Liz Collins is not one of the top scorers on the Duxbury girls hockey team, but she definitely has the propensity to score goals when it counts the most. Last March, the sophomore had the game-winning goal as the Dragons defeated Falmouth, 3-1, for their second straight MIAA Division II crown. Fast forward to this March, same stage, the state final game against Falmouth. And this time, Collins notched the only goal, leading Duxbury to its third straight state title, as the Dragons nudged Falmouth, 1-0, at Boston Garden. 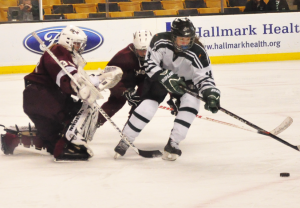 The win capped a brilliant 22-1- 2 campaign that saw the Dragons shut out their final seven opponents. It also avenged, for the second time, the only blemish on this year’s record, a 1-0 setback to Falmouth back in early January. “This was a total team effort,” said Duxbury coach Friend Weiler. “Liz got the game winner. She is one of those players who goes out and does her job and never complains. She is a hard worker. Every single girl on our roster deserves this.”

The goal came at the 12:22 mark of the second period. Collins broke in alone on Falmouth goaltender Madison Scavotto. As she went to shoot, Clippers defenseman Kendall Stouffer poke-checked her from behind. The puck went to the left, where Collins deftly reached for it and shot it into the far side before could get back into position, having come out of her net to challenge the Duxbury forward’s bid. From there, it was up to the defense and junior goaltender Rachel Myette to hold down the fort.

“Defense wins championships,and that held true here,” Weiler said. “We knew it was going to be a war of attrition. We wanted to keep their offense to the outside as much as possible and I think we did that.” Duxbury outshot Falmouth, 31-22, for the game. The Clippers went on a power play with 3:26 to go in regulation, but couldn’t get the equalizer. Falmouth coach Erin Hunt pulled Scavotto for a a sixth attacker in the final minute, but the Dragons won a couple of key faceoffs and the Clippers never did get an excellent chance to tie it.

“We didn’t want to lose to them” said Duxbury senior captain Hannah Murphy. “We knew this was going to be a tough game, but I did not want to lose to Falmouth.” “When we started this program 11 years ago with 12 girls, it was always our goal to get here (state title game),” Weiler said. “But to be able to sustain this is beyond my wildest dreams.”

Previous: Alison Butler Does It For St. Mary’s Lynn
Next: Salisbury Puts It All Together At The Right Time