It seems that whichever level hockey players excel to that there is always a memorable story behind the ‘love for the game.’

Callanan, 19, is one of seven siblings and gained interest in hockey after he started skating and “shooting around in the driveway” with his older brother in Stony Point, NY. One of the EHL’s top 2020-21 rookie skaters also expressed how his hockey memories go back as far as he “can remember,” and growing up Callanan’s neighborhood entailed endless pick-up hockey games. 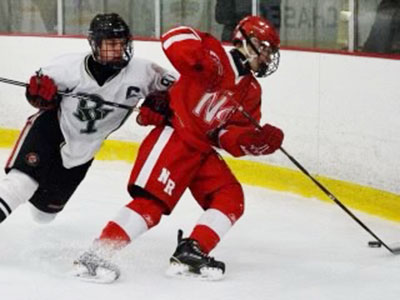 On his road to the EHL, Callanan played for North Rockland HS in New York.

While he enjoyed playing competitive football and excelled at the wide receiver position during his youth, Callanan eventually favored pursing ice hockey and migrated north.

North of the Border

After lacing up the skates for the New Jersey Hitmen’s 16U “AAA” level and lighting the lamp for North Rockland High (NY), Callanan earned a roster spot with the Canadian International Hockey Academy’s (CIHA) 18U “AAA” program. The CIHA is a top prep-school, which is located in Rockland, ONT.

“It was a great experience, and I made a lot of great friends,” said Callanan. “I feel like that’s where I was on the ice training and working out every day and it was just all hockey, hockey, hockey.” 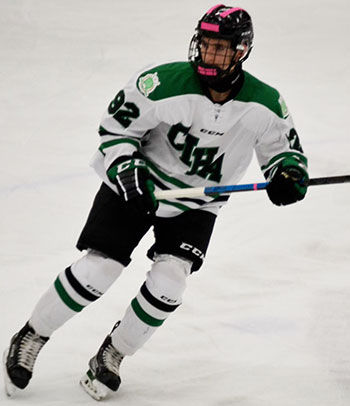 Here is Corey playing for the Canadian International Hockey Academy in Ontario a few seasons ago.

It’s safe to say that it was a great experience for the Stony Point, NY native. Callanan blossomed on the ice at CIHA and netted 16 goals while recording 21 assists for 37 points in 43 games played. Though, the success north of the border still led the left-handed shot back to his roots.

While Callanan spent the 2019-20 campaign in the United States Premier Hockey League (USPHL), the 6-foot forward certainly found a home and thrived with Apple Core for the 2020-21 EHL campaign.

One of the EHL’s rising stars felt that signing with New York and head coach Mike LaZazzera’s squad was a “good fit” from the get-go. Similar to Callanan’s experience in Canada, his performance on the ice for Apple Core was nothing shy of impressive.

In 33 regular-season contests, No. 27 tallied 16 goals and 24 helpers for a total of 40 points. The 19-year-old ranked second on New York in points and recorded 13 multi-point efforts on the year.

“I feel like just meeting all my new teammates is something I really enjoyed,” said Callanan on his experience with Apple Core. “The guys and coaches are great, and I feel like as a team we really do jell.”

Appreciating His 1st Season In the EHL & What’s Next

There’s no doubt that one of Apple Core’s top skaters from this season turned heads around the league with his performance on the ice, but Callanan also enjoyed the EHL off the ice. 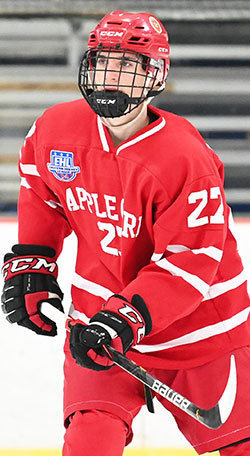 “I really thought it was cool how there is the EShow podcast and the fantasy aspect,” said Callanan. “I know a lot of guys like it and how the league talks about us and drafts us in the fantasy, plus the top plays of the week. The EHL does a great job at giving the players exposure to help them get to the next level.”

After speaking with one of the EHL’s top-point getters, it wasn’t surprising to learn that he was all-in on hockey and is a student of the game.

“I love everything about hockey,” said Callanan. “I watch the pros and see what they do and try to bring that to my game and elevate my game any way I can and be the best player I can be.”

At 19-years-old, Callanan said that he’d like to compete at the “highest level I can possibly play at next year” for the Junior hockey level.

Since he can remember, hockey was first nature for Callanan, and the chances are that the Junior hockey community will also remember the skater when he’s ready and officially commits to a collegiate program.