The Eastern Hockey League not only boasts skaters from all around North America, but numerous countries. Believe it or not, one of the EHL’s top players this season hails from a country that arguably could surprise some in the Junior hockey community.

That skater not only moved to Canada and excelled at his passion for hockey almost a decade ago, but is also a native of Japan.

New Jersey 87’s forward Kei Yasuda was the first player to share his Road to the EHL for the 2020-21 campaign.

Lacing up the Skates

No, it’s not common to witness Japan in the Winter Olympics or at a World Junior Championship for ice hockey, but that didn’t stop Yasuda from capturing a dream. The 20-year-old expressed that he gained interest in the sport considering that his father played collegiate hockey in Japan, which was then followed by his two older brothers.

Yasuda followed his idols’ passion for the sport and recalled first lacing up the skates at the age of seven-years-old. It seems that the rest is history. The fact that there weren’t many rinks in Japan didn’t hold back Yasuda from gaining interest in hockey and eventually the unique challenge carried him overseas. 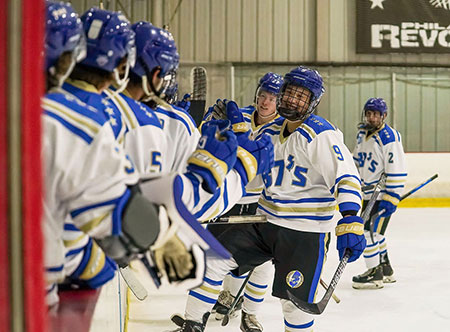 Kei Yasuda of the New Jersey 87’s hockey journey has taken him from his native Japan to the Garden State.

“I was able to practice with NHL players at the school,” said Yasuda. “Coming to Canada from Japan and seeing some of the best players in the world, it was honestly pretty cool to see and experience that.”

One-year later, the right-handed shot moved to Connecticut to play both travel and High School Hockey in 2014-15 season. Yet, while the potential on the ice was present – life off the ice was not exactly easy, at first.

“I didn’t know any English at that point,” said Yasuda. “My parents didn’t move here with me and I came here (North America) by myself, and it was tough honestly. I was lost, at first.”

Imagine being in his skates at that age…

Still, the overseas skater persevered and embraced a new culture while gaining the attention of elite hockey levels in the United States. Yasuda skated for the Connecticut Wolf Pack “AAA” 14U and 16U teams from 2014 until the end of the 2016 season, but in 2016 he earned one of the highest honors any hockey player aspires. 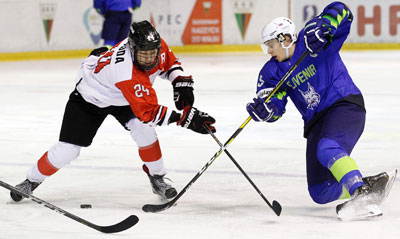 Kei Yasuda has represented his native country of Japan at both the U18 and U20 levels.

Yasuda was selected by Japan’s World Junior Championship 18U team, which competed against the tournament’s “qualifying countries” such as Italy, Slovenia and Ukraine among other nations. The 87’s current leading scorer followed up his 18U WJC campaign by earning a roster spot on his native country’s U20 WJC squad for 2016-17 and 2018-19.

“It’s always great to play for my country,” said Yasuda. “Playing against good countries and at the World Junior Championship was always a good experience – it was really fun but really hard to play for your country and the experience helped me get better.”

He also recalled a special memory while representing Japan at the 2015-16 18U WJC in Italy.

“We made the final and we played against Hungary, and we were winning by one goal until the last 10:00 of the game,” said Yasuda. “And I actually scored the game’s next goal and after that I thought we were going to win, but they scored two more goals in the last 5:00 and we lost, 3-2. We couldn’t win the championship, but the atmosphere is something that I could never forget, and the place was packed. It was really an exciting moment for me.”

While skating for both Cheshire Academy (High School) and the Wolf Pack in Connecticut, the EHL’s Connecticut Chiefs recruited the rising all-star for the 2018-19 season. The passionate EHL rookie wasted no time making an impression on the league, after he netted 19 goals and collected 18 assists in 32 games with the Chiefs – you can do the math.

He also then gained positive attention from other Junior hockey leagues. Yasuda dressed for the P.A.L. Jr. Islanders of the USPHL’s National Collegiate Development Conference (NCDC).

It seemed that the youngster appreciated his brief tenure with the Islanders and it also worked out for the best.

“It was really competitive and helped me grow and excel as a player,” said Yasuda. “I was in a spot where I had to practice hard every day just to show my coach that I could be in the lineup. I never experienced that type of compete level before and just all the talented players I was surrounded by.”

Yes, he departed the EHL and challenged himself to excel, but Yasuda was still on the Junior “A” league’s radar.

New Jersey head coach Adam Houli was intrigued by Yasuda from day one after he skated against the 87’s in 2018-19.

“We watched and played against Kei in the league during our inaugural season,” said Houli. “We knew he’d fit our needs because he is a tremendous skater and competes with grit everywhere on the ice. The following year he made the jump to the NCDC and we just kept tracking him and tracking him. We were lucky to have the chance to bring him in. I think he fell in love with our system, our way of doing things and it’s been a good synergy between all of us.”

Yasuda also confirmed the chemistry between he and the 87’s organization.

“I love this team,” said Yasuda. “We work hard on the ice and off the ice we basically do everything together.”

The humbled youngster won’t admit it, but it shouldn’t come as a surprise to those who’ve followed the talented skater that he is ranked third in the league for scoring with 21 points entering Week #6 for this season.

Yasuda also has six points (2g-4a) on the power-play, but his play away from the puck is arguably more impressive and what Houli appreciates the most.

“His skating ability and lack of giving up on any play,” said Houli. “He is very tenacious and has skills that others do not have but he plays a simple game.”

The 87’s head coach wasn’t shy to express his admiration for Yasuda’s leadership abilities, either.

“Off the ice he is a consummate pro. He is laser focused at everything he does and he doesn’t take a ‘day off’ for practices or for games,” said Houli. “He approaches every day with the same attitude and that is not easy. He 100% respects the game, and the game respects him.”

While Yasuda displayed that he is always busy working at his hockey skills on or off the ice, the ‘student of the game’ also explained his desire to attend a four-year collegiate institution. After his Junior hockey tenure, the 20-year-old aspires to earn a degree in business and play the sport he’s known since he can remember at the NCAA Division III level.

Yet, in the meantime, Yasuda is just enjoying the ride on the Jersey Shore.

“I can see myself growing up and getting better every day as a player. I just feel good on the ice and have a lot of confidence out on there, and I’m really just enjoying playing the game right now.” 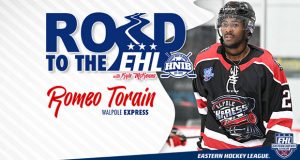