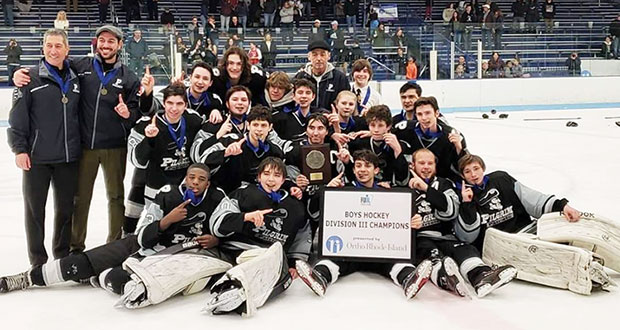 Pilgrim High School brought home its second Division 3 Rhode Island boys hockey state title in a row. This comes a year after the team won its first in decades. The team swept WW/EWG again for its second straight title

What was the difference for you guys in the finals? Another sweep. We have a tenacious group of kids. From the moment we beat Mt. Hope in the semis, the focus was championship or bust. This group understood what it would take to get back to the finals and win, and set their minds on doing just that. The seniors and juniors knew what it was like to lose and win in the finals. They were dead-set on ending the season on a winning note.

Who were the key parts of the offense in the playoff run? Jack Clements, Matt Pacheco and Collin Driscoll led the way for the offense. All three were vital in leading the offense during the title defense. Sean Noel, Dylan Gallagher and Danny DeRobbio rounded out the offense on the forward end. Sammy Clements and Eric Stevens proved to be a force in shutting down the opposing team’s offense in both series.

And defense and goalie was obviously huge, too. The defense and goalies were great throughout the playoffs. AJ Sherlock, Ryan Pietros, Chris Quirk and James Cook were all instrumental. Danny DeRobbio yo-yo-ed back and forth from wing to defense, which helped stabilize the defense. Dylan Cunetta stole the show in the finals in net, allowing just two goals in the final series. Connor Williams grabbed the win Game 1 in the semi-finals.

How cool is it to bring a title to this school for the second year in a row — especially when you guys were young and it seemed like not many gave you a chance? With two goalies brand new to the position, as well as losing five seniors to graduation, we weren’t given much of a chance to repeat. The kids made up their minds early on that they were going to stick together as a team, support one another and play through adversity, no matter what people said or felt.

As the season wore on, the confidence grew, as well as their expectations. Entering the finals, their confidence in their abilities and their teammates were at an all-time high. We told the kids before the season began it would be a long and difficult road to repeat. Being the first team to repeat in Division 3 since Tolman did it in 2004 was quite the feat for this team.

What can you say about your senior class as a whole? This senior class was one of my favorites as a coach. Jack Clements, Matt Pacheco, Ryan Pietros and Zach Sayles all played a role in us taking home titles over the last two seasons. Their leadership and the identity they gave this team will be sorely missed. 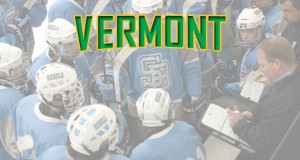