There have been very few women who have coached on boys prep hockey staffs over the years, but this season, there are two women serving as assistant coaches for boys prep hockey programs: Becky McCabe at Berkshire School and Katie Stames at Vermont Academy.

They have taken different roads to their current positions. McCabe served as the head coach of the Berkshire womens team the last three seasons, and had a four-year career at Boston College. Stames is a recent graduate of St. Lawrence University, where she starred in soccer. She was a three-sport athlete during her high school years at Peoples Academy in Vermont.

Both women did have the same question entering the season, however, whether the players would welcome them with open arms right away, or if it would take time for them to warm up to a female coach on the staff. Both Stames and McCabe had positive experiences right from the start. 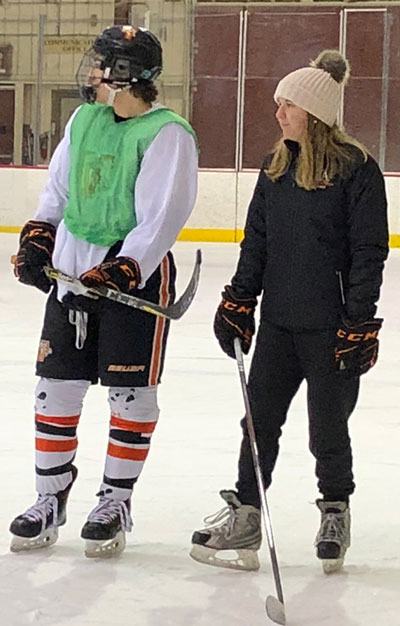 Katie Stames is a first-year member of the Vermont Academy boys coaching staff.

“These boys have accepted and treated me with respect from the moment I came here,” said Stames. “I believe that respect is something earned and not just given. Earning their respect comes from being there day in and day out with them. I truly care about each individual student athlete and want them to be as successful as possible. I have a level of trust with each one of them and they know that I am there for them on their bad days and will be right there with them to celebrate their accomplishments.”

McCabe built her relationship with the team early on, living and serving as a dorm parent in the same dorm building as some of the players and getting to know many of the students off the ice first.

“The boys accepted me right away,” said McCabe. “About half of the team lives in the dorm where I live, so I was able to build a relationship with them off of the ice before the season had even started. Most of them also know that I played at Boston College, so that experience carries a certain amount of credibility in their eyes. I also think that the Berkshire culture is a trustworthy and accepting one, and this made it an easy transition for me.” 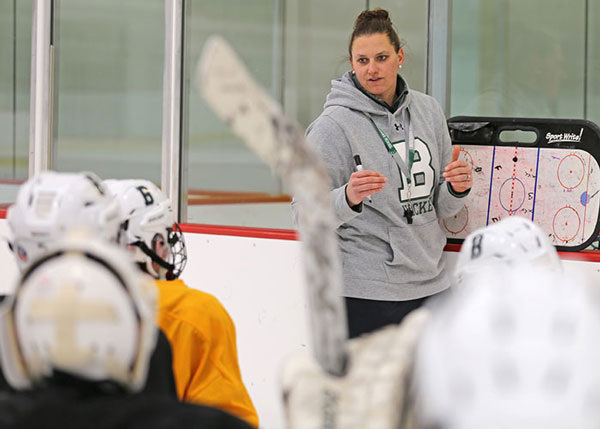 After coaching on the girls side, Becky McCabe has this winter joined the coaching staff of the Berkshire boys varsity team.

McCabe also played her scholastic hockey at Berkshire, a 2005 graduate of the school,  and was a key member of the Bears teams that won the New England Girls Ice Hockey Prep School D1 Championship back in 2003. She now not only serves as the assistant boys hockey coach but also is a track and field coach, a dorm parent and the Associate Director of Admissions.

At Boston College, she was member of the women’s ice hockey team that earned two NCAA tournament appearances and three Beanpot championships. McCabe was also named to Hockey East First and Second teams during her time there. She found the change from the womens game to the mens game rather easy.

“The transition was pretty seamless for me, as I have always lived in a boys’ dorm,” said McCabe. “And I have coached boys in the spring during track & field.”

For Stames, the biggest challenge, was making the transition from college athlete to coaching.

“Transitioning from being a competitive athlete to now standing on the sidelines is something that takes getting used to,” said Stames, who was an All American and two-time winner of the Vermont Gatorade Player of the Year in womens soccer. “Instead of being an impact player it is now my responsibility to share my passion with them. I have been involved in coaching both boys and girls youth sports for many years, but it is new for me to coach high school boys hockey.”

Stames commends Vermont Academy for welcoming her with open arms and allowing her the opportunity to get to know her students outside of the classroom.

“Working at Vermont Academy has been a wonderful opportunity for me after recently graduating,” said Stames. “VA fosters having a tight-knit community where you get to know your students really well. Whether it be in the classroom, in the rink, or in the dorm I enjoy getting to see these students daily.  I think that it is great that the boys team can have a female as an assistant coach.”

McCabe said she was influenced to move over to the boys hockey side by her older brother, Loomis Chaffee boys head coach J.R. Zavisza, whom she has considered a role model since she was a kid.  She knew switching to coaching on the boys side would certainly have its differences.

“The speed of the game is the biggest difference,” said McCabe. “The intensity and compete level is also higher on the boys’ side, and this is because of the physical nature of the boys’ game, compared to the girls’ game, where there is little contact. When I stepped away from the head coaching position on the girl’s side, I expressed interest in moving over to the boys, and the school was equally interested in having me work on that side.”

One of Stames’ big takeaways from her experience coaching so far is that she, along with McCabe, can inspire other female coaches to coach in any capacity that they want and that your gender should not matter.

“Being a female doesn’t define who I am,” said Stames. “Rather than focusing on my gender, what should be considered is who is the most qualified to coach with the boys team.”

Now that she made the transition, McCabe doesn’t see herself ever going back to coaching girls and hopes that other schools are willing to put women into bigger coaching roles.

“I think it has the potential to open up opportunities for women,” said McCabe. “But schools have to be willing to put women in those positions, as long as they are qualified and interested. It won’t work if it’s forced.”

Both Stames and McCabe are blessed to be in the roles that they are in currently and they both feel the schools they coach and work at are a big reason why.

“I could not be any happier to be working at Vermont Academy where I am able to build strong relationships with students academically, athletically, and socially,” said Stames.”

“For me, it has been great fit working with the boys at Berkshire,” said McCabe. “I love the sport of hockey, and this season, I have loved coaching the boys and now don’t see myself going back to coaching on the girls’ side.”