Fairfield (CT) Prep crossed the state line into Massachusetts a red-hot team _ winners of five of its last six contests.

But unfortunately, the Jesuits forgot to bring their newfound momentum along with them. Facing mighty Pope Francis, the Jesuits’ bright flame fizzled as it was the Cardinals who were on fire. Following a dominant second period, in which it netted three goals, Pope Francis went on to post a 5-0 victory Friday night at the Pope Francis Invitational Tournament held inside Olympia Ice Center.

“We are very happy to put a zero on the board against them,” said Cardinals coach Brian Foley. “I thought we were moving well without the puck to get open. Because of that we were able to play a fast-paced game tonight. The energy was there and the intensity was good.”

The Cardinals came out strong in the opening period, but had difficulty in their attempts to penetrate down low as Fairfield Prep continued to camp out in front of its goaltender Jake Walker. Pope Francis did manage to put up 11 of its 30 shots in the frame yet had nothing to show for it. 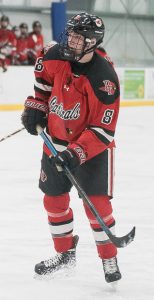 Things changed dramatically in the middle period. The Cardinals played a bit looser and started to create more space down low by stretching the ice and moving their feet better.

At 3:58 the scoring began as senior forward Makem Demers broke in free for the first of his two tallies on the night. Three minutes later, Demers, position in the low left slot, roofed a shot under the crossbar for his team-high 13th goal of the year.

“We kept trying to push the puck into the middle and get it down low,” Demers said. “We were trying to get shots in the slot area. I thought we started to wear them down but their goalie played very well. We had a lot of shots on him but he hung in there well. Our focus was to work the puck deep and try to out-work them. It started to work for us after that first period.”

The game’s complexion seemed to change off of Demers’ second score as the Jesuits (13 shots on goal) began to lose some of their steam. Things only worsened for Fairfield Prep later in the period when Max Cocchi broke in on Walker and slipped in a backhand to put the Cardinals up by three.

Pope Francis looked to be the faster, more crisper unit on the ice. That effort carried its way into the third period. Jon Tavella’s marker on the powerplay increased the Cardinals’ advantage to 4-0 at 3:50. Then, with less than two minutes remaining, Dillon Foster and Tavella teamed up on an odd-man rush that capped off by a Foster shot into the back of the net to finish things out.

“As a team we’ve still got a ways to go to reach our potential,” said Foley. “We have 12 seniors and a lot of guys with experience on this team. But everyone here still has a little more to give and hopefully we can get that out of them and reach our potential as a team.”

At times it wasn’t pretty nor was it fluid. But in the end, Delbarton, after a four hour bus ride, was no doubt pleased to come away with its triumph over Bishop Hendricken.

The Green Wave opened this contest flat as they were unable to generate much offense over the better half of the opening period. But in the closing minutes, they seemed to get their legs beneath them. Max Williams’ backhander cutting across the goal mouth gave Delbarton a 1-0 lead.

“I thought our first period was one of the worse periods we played all year in terms of moving the puck and icing the puck when we didn’t have to,” said Green Wave coach Bruce Shatel. “We talked about in between periods and I thought things got a little better.”

Things did begin to open up for them in the second. Just four minutes in, senior Michael Balzarotti, the Green Wave’s leading scorer with 18 goals, raced down the left side before stopping on a dime inside the left circle and firing a laser past Hawks netminder Patrick Gribbin.

But to Bishop Hendricken’s credit, it never quit. Jack Dean’s retaliation goal 1:46 later cut the deficit to 2-1. But good teams always seem to come up with an answer. The defending three-time New Jersey Private champins did just that. Ben Conrod did the honors after taking a long pass off the half wall and beating Gribbin (19 saves) down low.

The Hawks, in desperation mode coming out for the third, played their best period of the evening. Bishop Hendricken continued to make its presence felt inside the Green Wave zone by putting six shots on net and just missing on others. However, nothing got past goalie Brett Cleaves as he finished with 16 stops.

“I wasn’t thrilled with our performance but the effort was there,” Shatel said. “Balzarotti’s goal was big because it put us up by two. Bishop Hendricken is a good team and they kept working.”