Delbarton (10-0-2) remains atop the rankings after going 2-0-1 in the new year, most notably winning 6-3 at St. Augustine Prep on Jan. 8, less than a week after the Hermits had knocked off then-No. 2 Don Bosco Prep. Special teams were the difference in that win, as Delbarton outscored St. Augustine Prep 3-2 on the power play, with sophomore defenseman Jalen Kaplan rifling home twice and senior forwards Anthony Farinacci and Tyler Kobryn each picked up two assists.

St. Augustine Prep (6-4-1) rose to the No. 2 spot with four consecutive wins against New Jersey opponents (two of their four losses have come to relatively nearby Pennsylvania private schools), most notably a 3-0 win at Don Bosco Prep on Jan. 3. Giovanni Albano made 24 saves to key the win, while Carson Brière struck for a goal and an assist. Tyler Booth hit for a hat trick in a losing effort against Delbarton. The Hermits face a packed January schedule, including two games against CBA and a rematch against Don Bosco Prep.

After posting just one win in four games, Don Bosco Prep (8-2-2) righted the ship with a 3-1 win at CBA on Jan. 6 and will seek a fifth straight Bergen County Tournament title later this month as the top seed. The road win came thanks to 23 saves from Alexei Masanko and two assists from Nolan Barrett, with Chris Mazzella scoring the eventual game-winning goal midway through the third period.

Two-time defending private state champion CBA (12-3-0) has not matched expectations through the first half of the season, going just 2-3 in Gordon Conference play. After Tuesday’s game against Freehold Township, the Colts will face their toughest part of the schedule, closing with six games against Gordon Conference opponents and one against Middletown North their closest rival in Shore A North.

The defending Public B champion, Middletown North (8-1-0) suffered its only loss against CBA by a narrow 4-3 margin on Jan. 4, as their furious third-period rally from a 4-0 deficit came up short. Division I commits Khristian Acosta (19-13-32) and Bobby Hampton (1-9-10) have been dominant when in the lineup, while Kevin Felice (11-9-20) and Vince Tomasetti (10-9-19) give the Lions a deep offense. Goalie Anthony Manfredi (.936) and the Lions face key January contests against division rival Howell, unbeaten Montclair, and legendary program Brick Township before facing CBA, possibly for the division title, on Feb. 2.

The field is more wide open after the top five, but for now, unbeaten St. Joseph Montvale (12-0-0) gets the call at No. 6. The Green Knights have their best team in years, and despite facing seven normally competitive private schools, St. Joseph has won each contest by multiple goals. Seeded second in the Bergen County Tournament, their performance in the semifinals and/or final will make or break their regular season. Dominick Posta (21-3-4), Ryan Grieco (5-15-20), and Pete Lombardi (7-12-19) lead the offense, while Brian Quinn (2-11-13) leads the defense in front of goalie Patrick Lynch. Captain Ed Klein’s return to the ice during and after treatment for Hodgkin’s Lymphoma has been one of the most inspirational stories of the season.

Perhaps dismissed as state-title contenders after graduating standout Alex Whelan, Ramsey (11-1-1) made sure nobody forgot with a dominant 5-1 win over Morristown on Dec. 30 in a rematch of the teams’ tight 2014 Public B state final. The names remain familiar. Senior Kyle DeBel (10-20-30) has blossomed into the team’s playmaker, with twins Anthony (10-9-19) and Frank (10-8-18) Steffe putting up similar numbers. Defenseman Brandon O’Callahan (3-10-13) is a defensive leader, but senior goalie Tyler Harmon may be the team’s most indispensable player. 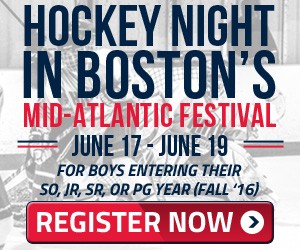 No. 8 Glen Rock (9-1-3) has played a tougher schedule than Ramsey but lacks a signature win. The Panthers have tied strong programs in Morristown, St. Joseph Metuchen, and Morristown while beating Notre Dame and Howell. Jake Kinney (8-20-28) and the Rosario brothers (Justin at forward, Matt in goal) lead the way, while Eddie Corvelli (17-10-27) and Peter Cassidy (11-10-21) provide the scoring punch.

No. 10 Morristown (11-2-1) slips back into the top 10 after a 3-2 win over rival Morristown-Beard on Monday. The Colonials have won five straight games in a slightly down year for the always tough Mennen Division, but the upset of the Crimson was by far their best result. Neither goalie Evan Szary (18 saves) nor forward Bradley Greik (game-winning goal with 3:06 remaining) had played when the rivals met in the season opener in November, and Morristown is now 11-1 in its last 12 games. 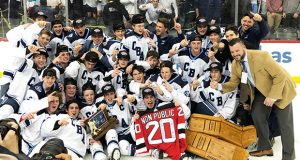