There could surely be an upset in the highly competitive field, but top-seeded and No. 1 Don Bosco Prep and No. 2 and defending champion Delbarton (second-seed) are the favorites.

Don Bosco was jolted last week when it absorbed a 2-1 overtime loss to Delbarton in the championship of the 60th Gordon Cup. The defeat was the first this season for the Ironmen (24-1-1), who had beaten Delbarton in both regular season meetings this winter.

Still, the Ironmen are the favorite as the tournament begins to capture their first state title. Don Bosco lost to Delbarton, 2-1, in last year’s final.

“You go through the gauntlet of the Gordon Conference and Gordon Cup and head right back at it for the state tournament,” said Don Bosco coach Greg Toskos. “There are no easy games for us in our bracket.

“The pressure of an undefeated season is now off our backs. I don’t think it was getting to our guys, but there was all the chatter about us being the team left without a loss. For us, we need to keep our game simple, use our speed and keep shots down on the back end. It’s playoff hockey now.  Win or go home.”

As far as Delbarton is concerned, the Green Wave always seem to elevate their game to an even higher level once the state tournament arrives. Don’t expect anything different now from Bruce Shatel’s club, which captured its eighth Gordon Cup crown with the 2-1 overtime win over Don Bosco.

Delbarton (19-6-1) has claimed the past two Private championships.

Pat Verney has used his tremendous tactical hockey knowledge and emotional bench leadership to steer the Montclair program back to its glory days.

Now, the Mounties enter the 43rd NJSIAA state tournament as the top seed in Public A, looking to secure their first state championship in 23 years. Montclair has won four state championships overall and six Gordon Cup titles. Montclair advanced to the Public A semifinal round in 2016 for the first time since 2002.

Montclair, along with Brick, Livingston, Chatham and Randolph, has a hockey history in New Jersey that few public schools can match.

Montclair (15-5-3), which has not won a state championship since garnering the 1995 Public championship, will open the post-season when it plays host to the winner of 17-Mount Olive/Hopatcong/Hackettstown and 16-West Windsor South/North in the Round of 16, which must be contested by Feb. 23. Prior to that last state title, the Mounties captured consecutive crowns in 1987 and 1988.

“We have played in a lot of low scoring, close games all season long,” said Verney, the former Hudson Catholic standout player who was inducted into the New Jersey High School Ice Hockey Hall of Fame in 2014, “and we feel that benefits us for state tournament hockey.”

The Mounties were edged by Livingston, 1-0, in the semifinal round of the McInnis Cup on Feb. 12, so the motivation to claim that long-awaited state title will be strong.

“We will go as far as Pat Ledgett (Sr. F) and Will Schiffenhaus (Jr. D) can take us,” Verney observed. “They provide a huge chunk of our offense but appreciate how important the defensive side of the puck is for what we do. And, we are extremely strong and deep in net with sophomore goalie Gus Bylin. He has stolen games for us this season. We have a lot of experience and we will rely on those minutes throughout the tournament.”

Challenging Montclair at the other side of the bracket with the second seed is Hunterdon Central (12-7-3).

Top-seeded Randolph (18-1-3) slides into the Public B bracket this winter, and the Rams have plenty of momentum after earning their fifth Mennen Cup – and first since 2008 – with a 4-2 victory over Morristown-Beard in the Feb. 16 championship. The Rams, who bowed out of the Public A semifinal last year to eventual champion Ridge, are seeking their ninth overall Public state championship – and sixth in the last 10 years.

Randolph will open against the winner of 17-Newton/Lenape Valley and 16-Tenafly/Cresskill in the Round of 16 on February 23.

Northern Highlands, the second seed, went 9-2 in its last 11 games to close out the regular season. Both losses came against league rival St. Joseph Montvale, the latest a 2-0 setback in the Big North Gold Cup final on Feb. 16. Highlands plays winner of 18-Park Regional and 15-Passaic Valley/Cedar Grove in the Round of 16 on Feb. 23.

Third-seeded Ridge, which won Public A in 2017, played for its league title in the Skyland Cup on Feb. 19 against Pingry. The Red Devils open their state tournament play when they face-off against the winner of 19-Brick Memorial and 14-Millburn (Kelly Cup champion) in the Round of 16 on Feb. 23. 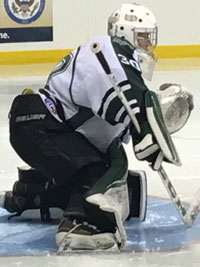 Fourth-seeded Livingston is definitely here to challenge for the title as well. The Lancers, defeated by Summit, 3-1, in the McInnis Cup championship on Feb. 16, play the winner of 13-Scotch Plains-Fanwood and 20-Ridgewood in the Round of 16 on Feb. 20.

Don’t dismiss either Middletown North or Middletown South, either. Fifth-seeded Middletown South enters the post-season 5-1-2, the only loss coming against fifth-ranked St. John Vianney in the Handchen Cup final on Feb. 15. Middletown North, the sixth seed, is 8-1-2 in its last 11 games and boasts impressive victories over Vianney and Wall this winter.

This will mark the first time in the previous 42 state tournaments that there are four separate brackets, with the addition of the Public C field this winter.

Top-seeded and fourth-ranked Summit just won its second straight McInnis Cup title, which it earned with a 3-1 decision over Livingston on Feb. 16. The Hilltoppers enter the tournament with an eight-game unbeaten streak (6-0-2) in which they have yielded just seven goals against. Summit, eliminated from the tournament by eventual Public B Champion Glen Rock, 3-1, last year, will play the winner of 17-Hopewell Valley and 16-Cranford in the Round of 16 on Feb. 21

Second-seeded Wall will play the winner of 18-Mountain Lakes/Boonton and 15-Verona/Glen Ridge in its Round of 16 match on Feb. 21. Wall comes off a stunning 2-1 loss to Manasquan/Point Pleasant Beach in the final of the Dowd Cup on Feb. 15.

Third-seeded Chatham, which advanced to the Mennen Cup semifinal last week before it was defeated by Morristown-Beard, will face-off against 14th-seeded Jackson Liberty on Feb. 22. The Cougars won the Public B state crown in 2011 and 2013.

Last year’s Public B winner and fourth-seeded Glen Rock, which rolled to an 8-1 win over Wall in last year’s B final, has a tough test in its playoff opener as it meets 13th-seeded Montville (Haas Cup champion) in the Round of 16 on Feb. 23. Glen Rock was knocked out in the semifinal round of the Big North Gold Cup, 2-1, by St. Joseph of Montvale on Feb. 12.

““They’re a lot better team than people give them credit for,” Glen Rock coach Anthony Yelovich said of Montville. “Our approach now is to stick to our game plan. We had some struggles during the season, but we were able to string some wins together at the end of the regular season. started to string together some wins toward the end. We still have a lot of experience and that playoff grit. You throw everything out from the regular season now and live to play another day.”