Ridge 2, Watchung Hills 1: Ridge, No. 10 in the HNIB News rankings, was denied in its quest for the Skyland Cup last month when it was defeated by Hunterdon Central, 2-1, in overtime. It was a loss that surely helped launch the Red Devils on a post-season run that eventually led to their second Public A state championship.

Ridge (23-6-1) defeated perennial power Randolph, 4-2, in the semifinal round on March 2 to advance into its third state final. Watchung Hills was making its second journey to a championship. 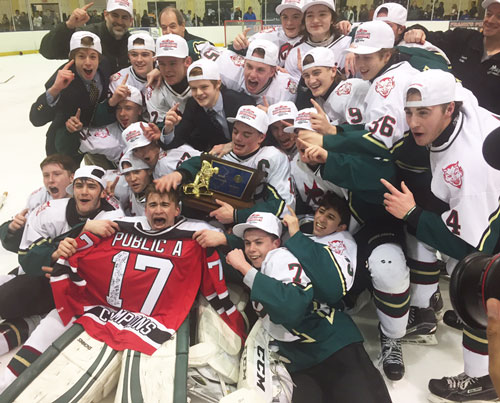 The 2017 New Jersey Public A state champions are Ridge after a 2-1 win over Watchung Hills in the title game.

Ridge and Watchung Hills, both Skyland Conference teams, had met already twice this season. The two skated to a 3-3 tie on Dec. 21 before Ridge took a 2-0 decision on Jan. 6.

After a scoreless first period Ridge received goals from Conor Villa and John Vilade to open a 2-0 lead. Watchung Hills sliced the deficit to 2-1 when Mat Piro hit the net with 6:23 left in regulation, but the Red Devils were able to hold on for the title as goalie Chris Ambrozy finished with 18 saves for Ridge. Ryan McHugh finished a stellar playoff run for Watchung Hills with 24 saves. 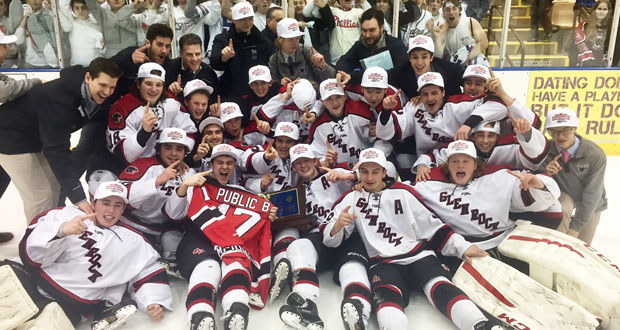 After falling short in last year’s Public B final, 5-1, to Bergen County rival Ramsey, the Panthers were not to be denied this time. Top-seeded Glen Rock left no doubt in its run to the Public B final this time around.

Peter Cassidy, Eddie Corvelli and Mathew Maselli all scored in the first period to stake Glen Rock (22-3-4) to a 3-0 lead and the Panthers were on their way. Cassidy, Corvelli and Jake Kinney all finished with two goals, Colin Morrow hit once and Ryan McAuley stopped 22 shots as Glen Rock swept to an 8-1 triumph over Wall (18-7-2) for its first Public B championship on Monday.

Kinney, a senior forward, led the way with 60 points on 30 goals and 30 assists; Cassidy (senior) added 22 goals and 19 assists and Maselli (junior) had 17 goals to go with 21 assists for Glen Rock, which also won the Big North Gold Cup with a 5-2 verdict over Northern Highlands on Feb. 17. 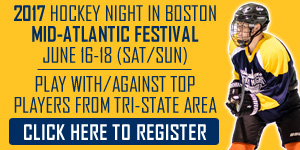 “We definitely had a plan to win,” said Yelovich, “and I believe we played our best game of the year, too. Wall had a good goalie and several players who could put the puck in the net, so we wanted to collectively shut down their top players. I think we did a good job and we used our speed to get behind their defensemen, get shots, and keep the puck deep.

“To be honest, it’s a surreal feeling to win the championship. I think each game this season our team got better and it was an entire team commitment. I really appreciate how much our players wanted to work and how close they got as a team. Our seniors were great leaders.”