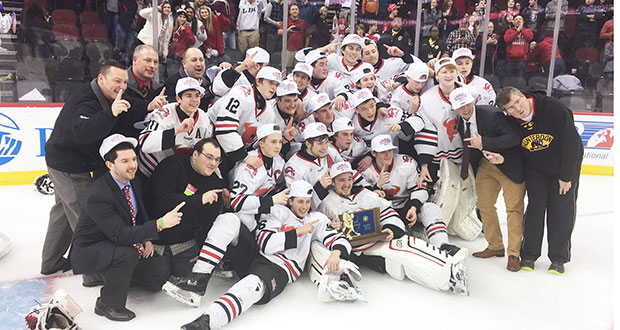 Hunterdon Central 5, Woodbridge 1: Hunterdon Central was unable to successfully defend its Skyland Cup title this winter, but the Red Devils took away something even better – the school’s first state championship.

Senior captain Scott Schnell scored three goals, Rich Stefanik collected three assists and Noah Dominick stopped 14 of the 15 shots he faced to lift Hunterdon Central (16-7-3) over Woodbridge Township (21-5-1) in the first final appearance for both clubs at the Prudential Center.

Schnell opened the scoring just 53 seconds into the game when he scored off assists from Stefanik and James Coussoulle to give the Red Devils a 1-0 edge.

Chris Del Gaizo extended Hunterdon Central’s lead to 2-0 when he connected for an unassisted goal at 4:07 of the first.

But Woodbridge was not about to go away, and Travis Beni scored on the game’s first power play with a deflection in front to cut its deficit to 2-1 with 10:08 left in the first. It was Beni’s 25th goal of the season and came off an assist from T.J. Evan.

That was as close as the Woodbridge, the first co-op to reach a state final, would come, however, as Erik Szanto restored Hunterdon Central’s two-goal lead when he struck less than five minutes into the second period for a 3-1 lead.

Schnell closed it out for Hunterdon Central with a pair of even strength goals – both assisted by Stefanik – in the third period.

Despite the loss, Woodbridge finished one of the more memorable journeys in state tournament history, as the ninth-seeded squad advanced with overtime victories in the previous two rounds.

In the quarterfinal round Woodbridge upset top-seeded Montclair in overtime after rallying from a two-goal deficit in the third period. Then, the Patriots came back from a 2-0 hole in the final minute of play against Marlboro/Holmdel as Evan tied the game with two goals 12.2 seconds apart, and then Beni won it in overtime.

Woodbridge also reached the GMC Cup final before dropping a 3-1 decision to Monroe on Feb. 16.