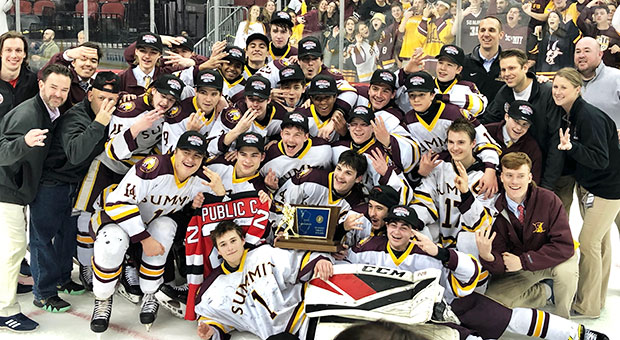 Senior forward Tom Pryymak scored twice, including the winning goal, and picked up an assist and his brother, Nikita, stopped 28 shots as defending champion and top-seeded Summit skated to a 5-2 victory over third-seeded Ramsey at the Prudential Center to repeat as New Jersey Public C champions.

The title was the third straight for the Hilltoppers – and fourth overall – as the Union County school finished at 22-3-2. Summit has garnered four overall state public titles now in five appearances in the final, its first coming in 2012.

Pryymak netted his second goal at 5:30 of the second period off an assist from Dylan Goldfarb to give Summit a 3-0 lead. Jake Lowry, Matt Vigliotta and Goldfarb also scored for Summit. The Hilltoppers also won the Union County Tournament championship and claimed the McInnis Cup in coach Ian Bell’s first season running the bench. The longtime assistant replaced veteran coach Keith Nixon, who stepped down after last season’s Public C title.

Ramsey (18-5-3) trailed, 3-0, but did not falter and sliced the deficit to 3-2 on second period goals by Nick Edwards and Tyler Botta. But Dylan Goldfarb connected late in the second to extend Summit’s lead to 4-2. Pryymak added his second goal into an empty net with 32.5 seconds left to seal the win.

Ramsey had defeated Summit, 5-1, in the Ice Vault Tournament on Dec. 23, so there was also some measure of revenge for the Union County school.

“We came out and set the tone offensively, then rode our big game experience taking it shift-by-shift,” said Bell, a former standout forward for Summit from 1995-98. “They had their way with us previously, and our motivation to achieve our goals stemmed from that fact. This group took it upon themselves to match their predecessor’s accomplishments and in some cases surpass those individual and team accomplishments. But nothing beats winning the last game of the year at the Rock for the third time in three years.”