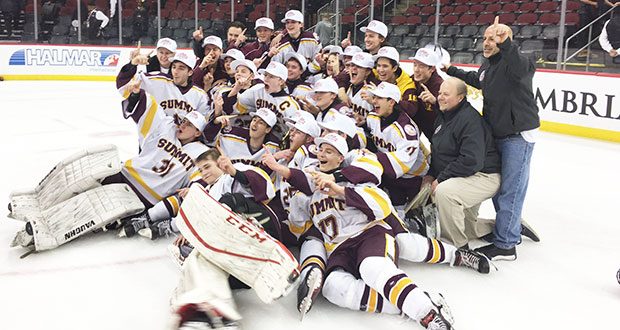 Summit 3, Chatham 0: Summit did skate to the hockey mountaintop this winter.

Featuring one of the deepest teams it has had in recent years, the top-seeded Hilltoppers were able to capture New Jersey’s first Public C championship, 3-0, over third-seeded Chatham with a pair of timely first–period goals and the outstanding goaltending of Nikita Pryymak.

The sophomore turned in one of the most impressive playoff performances in stopping all of the 32 shots that Chatham threw on his goal. In fact, Pryymak did not allow a goal while facing 68 shots in the last three tournament matches while leading Summit to its first state crown since 2012.

The Hilltoppers finish at 24-2-2 in a season that included its second straight McInnis Cup championship. Summit fell just one goal shy of winning the Union County Cup as well, bowing to Westfield, 3-2, on Jan. 16.

That defeat against county rival Westfield propelled Summit the rest of the way as the Hilltoppers went 9-0-2 after the setback, outscoring their opponents by a 42-9 margin in the stretch.

Summit grabbed a 2-0 lead in the first period on goals by Will Vitton and Greg Spitznagel and that proved enough.

Spitznagel, a freshman, added an empty net goal (his 20th) to seal the win for Summit with 53 seconds left after Chatham had pulled goalie Zachary Pendergrast (seven saves).

The two clubs had met before this season, with Summit edging Chatham, 3-2, in the Ice Vault Classic on Dec. 29.

Chatham, which finished 16-8, was looking to grab its first title since winning the Public B championship in 2013. The Cougars, who reached the semifinal round of the Mennen Cup this season before falling in overtime, 2-1, to Morristown-Beard, did all they could offensively and mounted sustained pressure in long spurts against Summit.

The Morris County team fired 32 shots on goal while holding their opponent to just eight attempts, but Pryymak would not bend at the other end.

Chatham advanced into the final with an impressive 6-1 win over second-seeded Wall in the semifinal round on Feb. 28. 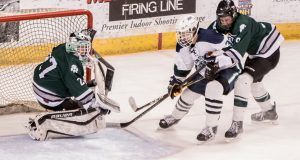