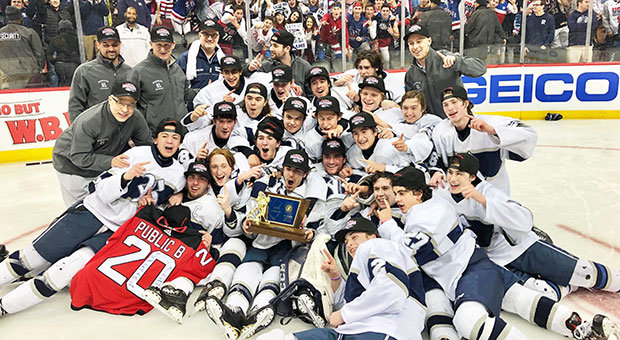 If there were a perfect script to finish off a stellar scholastic hockey career, JT Zangara wrote it at The Prudential Center.

In the biggest – and final – game of a memorable four-year career the senior forward scored 4:30 into overtime to register a hat trick and send top-seeded Randolph to a thrilling 3-2 victory over defending champion and third-seeded Ridge. The triumph allowed Randolph (21-3-4) to secure its ninth overall state title. The Rams have now appeared in 16 state championship contests, second behind only Delbarton’s 24. It also avenged a 4-1 setback against Ridge in last year’s Public B final. It marked the third time the two teams have met in the final, with Randolph now holding a 2-1 edge in the series.

After a scoreless first Zangara, the MVP in the Mennen Division this season, converted on a feed from freshman Ben Yurchuk to give Randolph a 1-0 lead in the second period. The Rams extended it to 2-0 on Zangara’s second, an unassisted goal 5:58 into the third.

But Ridge (19-6-5) responded with a gutsy rally as Reese Judson and Matt Balzarotti connected 32 seconds apart to square it at 2-2 and send the game into the extra period. Those tallies were the first two goals surrendered in the state tournament by Randolph standout senior goalie Gavin Einfeldt, who had posted three straight shutouts. Then it was time for Zangara’s heroics to seal the deal for Randolph, which lost just once in its final nine games, a 5-1 defeat against Morristown-Beard in the Mennen Cup final.

Zangara, who skated in three straight state finals, finished with 53 points (25-28) this season. In 103 career games at Randolph Zangara had 63 goals and 96 assists for 159 points.

“JT and the other seniors were haunted by last year’s loss to Ridge in the final,” said Randolph veteran coach Rich McLaughlin. “They started working last March to get back to the finals. After Ridge tied it we went back in the locker room and JT was a big voice in the room. The kids could have folded up the tents and gone home but he and others said they weren’t giving up and OT was a new beginning. Then JT went out and scored the biggest goal of his life. He’s a big-time player who steps up when it’s time to play.”