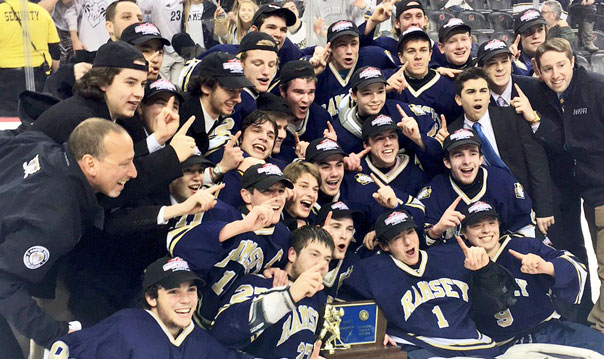 The third time was the charm for Ramsey (25-2-2) and its determined senior class, as the Rams returned to the Prudential Center – after losing each of the last two championship games by a single goal – and produced a signature win, 5-1 over county rival Glen Rock (23-3-3), to claim their second state title.

Despite graduating all-time leading scorer, three-time North Jersey Player of the Year, and Quinnipiac commit Alex Whelan, a veteran Ramsey team under first-year head coach Dean Portas recovered from an early-season stumble against Lakeland to essentially run the table, losing only in the Bergen County Tournament final in January to No. 3 Don Bosco Prep.

Top-ranked public school Middletown North, which had beaten Ramsey in such agonizing fashion a year ago, wound up as part of the revenge tour, falling 1-0 in a tension-packed semifinal last week.

Monday’s game needed no such drama, as Kyle DeBel (30-56-86) – part of a 13-member senior class that finally tasted success on New Jersey hockey’s biggest stage – struck for two goals and two assists in the dominating win.

Glen Rock’s consistently contending program playing in its first state final and coming in on a 13-game winning streak, made it a 2-1 game early in the second period on an Eric Spada goal, but Ramsey answered just 28 seconds later when DeBel set up senior Greg Botz for a momentum-killing goal.

Anthony Steffe (19-18-37) scored twice down the stretch, while outstanding goalie Tyler Harmon, so influential in the semifinal win over Middletown North, needed just 16 saves as the Rams reclaimed the Public B title they first won in 2009. Other seniors who were regulars throughout their careers included standout defenseman Brandon O’Callahan (5-35-40), center Garrett Mast (17-18-35), wing Frank Steffe (17-19-36), defenseman Will Danz, and forward Dale Cheyne (17-4-21).