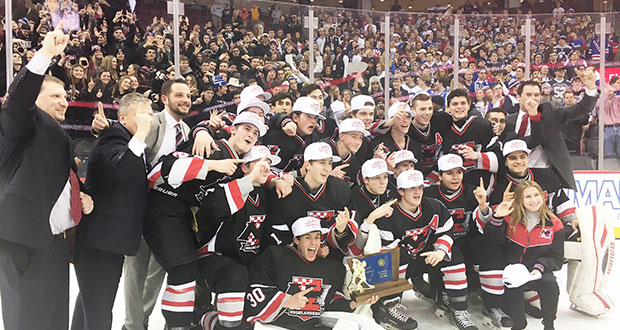 Northern Highlands 1, Randolph 0: Perennial power and top-seeded Randolph, skating through one of the best seasons in its history, was seeking to grab its ninth state championship while Northern Highlands was eyeing its first.

When it was all over, it was second-seeded Northern Highlands pulling off the upset with a 1-0 victory in a game that featured prime defending in front of two of the best goalies in the state.

Sophomore forward Cormac Cindrich scored his ninth goal of the season at 5:08 of the first period, with Aidan Connolly assisting, to give Northern Highlands (21-5-2) the lead and John Werber, a junior, did the rest in turning aside all 19 shots he faced.

At the other end was Randolph goalie Scott Kimiecik. The senior was strong as well in stopping 14 shots and had not allowed a goal in three previous post-season victories. Kimiecik, outstanding all season, had yielded just three goals and posted five shutouts in his previous seven starts for the Rams.

Northern Highlands was finally able to claim its first state title after making consecutive trips to the NJSIAA Public B final in 2008 and 2009.

It marked the first time Randolph has gone three seasons without winning a state championship since 2000-2002.