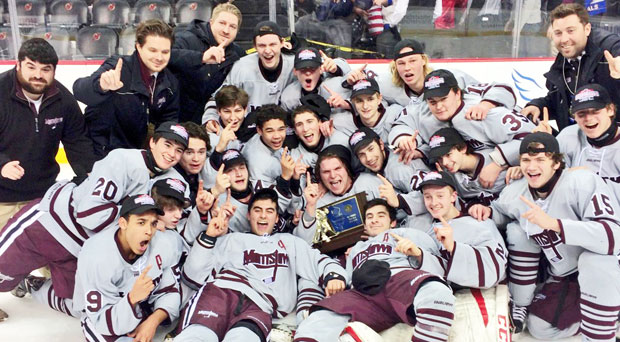 MORRISTOWN celebrates its New Jersey Public A state title after a 2-0 win over Randolph at the Prudential Center. (Photo courtesy NJ Devils)

Morristown’s roster this season included 10 seniors who, as sophomores, were part of the school’s first state championship, a 1-0 win in the 2014 Public B title game. Those seniors went out as champions in 2016, this time winning the Public A title 2-0 over county rival Randolph late Monday night, with two sophomores – one year too young to be part of that squad – making key contributions.

Yes, seniors scored both goals, but it took 28 saves from sophomore goalie Evan Szary (whose older brothers were on that 2014 team) and a key steal and assist from Drew Shandlay in the third period to shake the defending champion Randolph (19-5-3), which had won four of the last five Public A titles.

Regular-season champions of the Mennen Division and the state’s top-ranked Public A school most of the year, Morristown (24-3-1) took the lead late in the first period, as good work on the blue line kept the puck in the zone. Senior Jakob DeFares picked it up in the right face-off circle, carefully picked his spot, and sniped a wrist shot to the top right corner, over the glove of Randolph goalie Alec Swedlund.

Yet it was only through the heroics of Swedlund that the Rams stayed in the game in the second period, as he stopped DeFares twice and a Teddy Dolan breakaway in a frantic second period.

The decisive play came early in the third period, as Shandlay forced a turnover in one corner, then swept behind the net and tapped the puck toward the side of the crease, where Dolan arrived to snap home the second goal before Swedlund could react. From there, Morristown saw out the game with the solid forecheck and solid goaltending that allowed them to excel all year. The Colonials went 17-1 after the new year, bouncing back from an upset loss in the Mennen Cup semifinals to run the table in four state-tournament games.

The championship-game appearance was Morristown’s fourth in the last five seasons under head coach Bobby Jones, twice in Public B and twice in Public A due to the school’s fluctuating enrollment. Morristown became the ninth public school in state history – just two hours behind the eighth, Ramsey – to capture multiple NJSIAA titles.