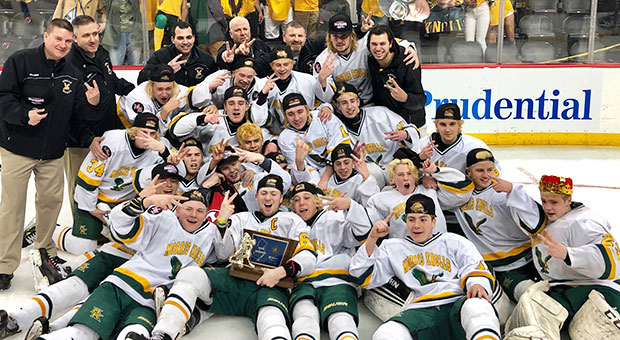 Morris Knolls/Hills is a repeat champion in New Jersey Public A after a dramatic 3-2 win over Montclair in state final. (Photo by JC Hageny/HockeyClan

Junior forward Jason Kwestel redirected a shot from Dylan Idland to conclude this classic in overtime as top-seeded and defending champion Morris Knolls/Hills outlasted second-seeded Montclair in dramatic fashion, 3-2, for the Public A championship at the Prudential Center.

Morris Knolls (18-6-3) earned its fourth state championship in as many tries. The Morris County club skated to a 6-1 decision in last year’s Public A final, becoming the first co-op to earn a state title.

The setback was crushing for a valiant Montclair (18-6-2) team, making its first trip to the state final since 1998 and looking for its first championship since 1995. The Mounties got the equalizer on a spectacular goal from Brett Janifer with 4:08 remaining in regulation to send the game into the 15-minute overtime. But it was Kwestel who tipped Idland’s attempt past Montclair goalie Lucas Podvey, who had lost his stick seconds prior to the shot, to end the contest in favor of Morris Knolls, which closed its campaign with a 10-1 finish.

James Betz also assisted on the winning tally. Elliott Marken and Podvey were both outstanding in goal for their respective clubs. Marken stopped 26 shots while Podvey finished with 25 saves, including a penalty shot.

George Osterberg scored in the second to give Montclair a 1-0 lead before Morris Knolls responded with a tally by Kwestel to knot it at 1-1.

Jake Quinn connected midway through the third to put Morris Knolls back in the lead before Janifer’s tying goal for Montclair.

“Not too many people thought we’d get back here after graduating so many seniors who played key roles for us last year,” Knolls coach Tim Kepler said. “There was no doubt in our player’s minds they couldn’t do it again. They worked their butts off and sacrificed their bodies for the team. They believed in each other and it all paid off.”