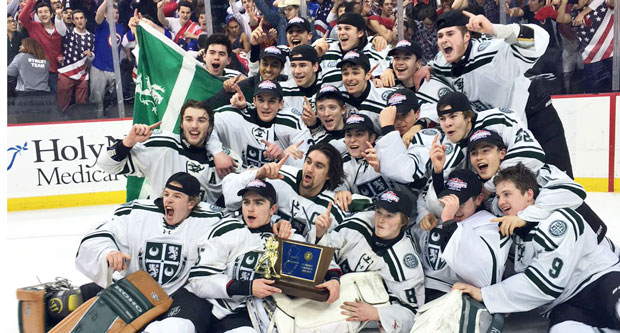 The entire season saw the state’s elite teams trying to catch up to Delbarton, which won six consecutive state championships from 2008-13, but was upset in the semifinals in 2014 and blew a 3-0 lead in the 2015 state championship game.

The Green Wave started 11-0-2, but two-time defending private state champion CBA seemed to have caught and passed the Green Wave – again – after beating Delbarton 3-1 for the Gordon Cup title on Feb. 20.

Yet on Monday afternoon at the Prudential Center, in a strange state championship game that saw the state’s two best teams combine for just 21 shots on goal, Delbarton (25-3-2) set a New Jersey record by winning a share of its 11th state title against CBA (25-5) with a 3-1 win of its own.

The Green Wave only needed eight shots to earn the victory, spending virtually the entire third period in a passive forecheck and so minimizing the action that the shot margin for the final period was 3-0 in CBA’s favor. The hard work had already been done.

Delbarton jumped on top midway through the first period when junior Mark Benemerito stole the puck in the right corner, continued behind the goal line, and backhanded a pass in front, where senior Tyler Kobryn one-timed it past CBA goalie Michael Cernero.

Playing Delbarton in a private state championship game for the sixth time in the 22-year history of separate tournaments, CBA, which entered on a 12-game winning streak, responded early in the second period, when a puck thrown in front from the corner was knocked home by Liam Noonan.

The Green Wave took control of the game five minutes later, as senior Danny Farr dropped a pass for freshman John Farinacci just inside the offensive zone, and his wrist shot beat Cernero to the glove side. Less than a minute later, Delbarton’s power play made it 3-1 when sophomore Nick Siffringer’s cross-ice pass was swept home by Farr.

From there, Delbarton closed up shop to ensure there would be no repeat of last year’s comeback. Junior goalie Troy Kobryn, especially frustrated a year ago in surrendering CBA’s final two goals, made 12 stops for the victory behind a defense led by senior captain Andrew Petrillo.

The championship is the seventh in nine years and the eighth in 11 years for the Green Wave, the ninth for head coach Bruce Shatel in his 15-year stint as head coach. It also allows Delbarton to lay claim to being one of the top teams in the Northeast once again, given their regular-season triumphs over Massachusetts Super 8 seeds Pope Francis and Malden Catholic and Rhode Island regular-season No. 2 Bishop Hendricken.