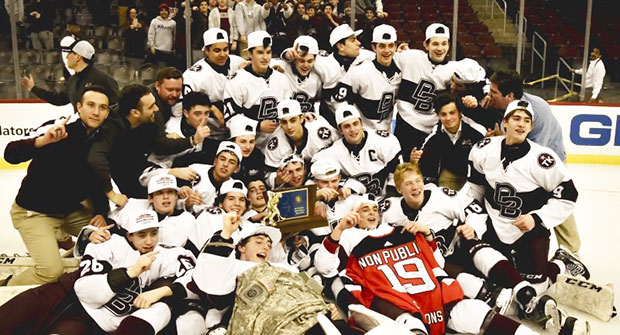 For the past several seasons – especially the last two – Don Bosco Prep has been chasing an elusive championship, that state title that always seemed to slip from its grasp. Until now.

The Ironmen, No. 1 in the HNIB News New Jersey Top 10, capped the best season in school history  when they skated to a 3-1 victory over second-ranked Delbarton at the Prudential Center in Newark for the NJSIAA Non-Public championship.

Senior forward Liam McLinskey, who is headed to Quinnipiac, scored twice, including the game-winner to snap a 1-1 with 2:45 left in the second period in the championship match as Don Bosco closed its historic campaign at 27-1. The season included a 23-game winning streak for the Ironmen, who’s last setback came on Dec. 5 to Gordon Conference American Division foe and No. 3 Christian Brothers Academy, 3-2.

It marked the first state crown for Don Bosco after two straight shots at the title game, and fourth overall. In its past four attempts the Bergen County school had suffered losses to Delbarton in each of the past two Non-Public championships (20017, 20018). Don Bosco dropped its previous two final appearances to CBA (2013, 1994).

Don Bosco, which defeated Delbarton in all four meetings this season, also captured its eighth straight Bergen County Tournament crown; and claimed its second Gordon Cup when it forged a 5-3 victory over Delbarton in the final on Feb. 15.

The Ironmen’s 27-1 record combined with their three major titles – Non-Public, Gordon Cup and Bergen County Tournament – put the club in the upper echelon in the annals of New Jersey hockey history for a season.

“This team is absolutely in the argument with one of the best hockey teams ever in New Jersey in terms of what it accomplished in a single season,” said Don Bosco coach Greg Toskos, now 214-99-25. “I think it started four years ago when we lost in the semifinal round to CBA in overtime. We had a really good team that year and you could see with McLinskey and Sedlak as freshmen we were on the verge of something.

“Then we lost in the final to Delbarton two years ago, and Delbarton deserved it. Last year a lot of people thought it was our year, but in the end, Delbarton got the championship again. I think that really pushed this group this season. I know it’s a cliché but with this team, they really did refuse to lose this year.