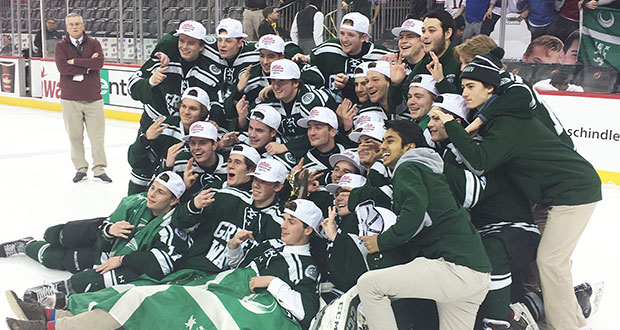 “If you want to win the Private state championship, you’re going to have to beat Delbarton to get it. They set the standard every year.” – Gordon Conference coach, 2009

NEWARK, N.J. – That assessment above has not changed since it was made nine years ago – Delbarton is still the team to beat.

Once again, the Green Wave came through with another in a long run of clutch performances on Monday as Pat Harrington, Jalen Kaplan, Hunter Macy and Bayard Hall all finished with a goal and Kenny Burgess stopped 33 shots as Delbarton downed then-top-ranked Don Bosco Prep, 4-2, in the NJSIAA Private championship at the Prudential Center in Newark.

The Private title was the ninth in the past 11 years and 13th overall for the for the Morris County power – 11 of which have come under coach Bruce Shatel.

The Green Wave closed out the season with seven straight victories, going 12-1 over their final 13 games. Delbarton finished at 23-6-1 and claims the No. 1 spot in the final Hockey Night In Boston New Jersey Top 10 rankings. 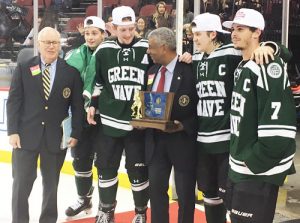 Additionally, Delbarton defeated Don Bosco, 2-1, in overtime to claim the 60th Gordon Cup on Feb. 16. The triumph represented Delbarton’s eighth Gordon Cup and marked the sixth time the Green Wave have collected the state’s most prestigious Cup and the Private championship in the same season.

Don Bosco, which had defeated Delbarton in both regular season games prior to the Gordon Cup loss and earned the most wins in school history this winter, rallied in the second to grab a 2-1 lead on goals by Robbie Greenleaf and Tyler Sedlak less than two minutes apart.

But Delbarton capitalized with a key power play goal off the stick of Kaplan off assists from Nick Siffringer and Macy with 55 seconds left in the second period, squaring the game at 2-2 to head into the third.

Delbarton broke the tie and was on its way to the title when Macy connected at 2:31 of the third for a 3-2 lead, with Brendan Clark and Kaplan assisting.

Don Bosco, which outshot Delbarton 35-16, pulled goalie Max Schwarz with 1:30 left and also had a power play – and a six-on-four advantage-over the final minute, but Hall sealed it for Delbarton with an empty net, shorthanded marker with 38 seconds remaining.

It also marked the second straight year that Delbarton had defeated Don Bosco in the final. Last year the Green Wave took a 2-1 decision.

“We got better as the year went on, said Shatel, who earned his 400th career victory this season (406-52-36). “We were better than when we played Don Bosco them the first time. We had to fight through some injuries and and had tough stretches with sickness, but we peaked at the right time. I guess with some hard work we had a fortunate turn of events from December to March.”

Outshot by a 14-4 margin in the opening period of the championship game against Don Bosco (27-2-1), Delbarton managed to take a 1-0 advantage into the second on Harrinton’s even strength goal at 10:14.

It was the first time in their previous three meetings that Delbarton had struck for the initial goal.

The Ironmen were able to dispatch Delbarton in the two regular season meetings, earning a 3-0 decision on Dec. 12 before edging their rival, 2-1, on Jan. 21. The pair of defeats set Delbarton on a different approach moving forward.

“We learned from the first two meetings what we couldn’t do against Don Bosco,” Shatel recalled. “We couldn’t play a wide-open game or skate with them. We’d get slaughtered if we got into that run-and-gun game with them. We made some adjustments on the forecheck and did some different things in the neutral zone, and our guys’ buy-in to the changes was through the roof. Our kids dedicated themselves to doing all the little things and our habits got better as the year progressed.”

As for its 13th state title?

“It really doesn’t get old, but it doesn’t get any easier,” Shatel said. “It’s so hard to get to the final, and even harder to win it. Your team definitely has to have some good fortune on its side.”

Minutes after the final buzzer had sounded on the state final, Delbarton’s players got a final surprise as Green Wave alum George Parros, now the head of the National Hockey League’s Department of Player Safety and a former New Jersey All-Stater in 1998, came into their locker room to congratulate the club.

“George walks in and the kids were all jazzed up,” Shatel said. “He told them how proud he was to be a Delbarton alum and them winning the championship, and how impressed he was with their effort. It was super.”

Parros, who skated at Princeton, played 474 games in his nine-year NHL career with Anaheim, Los Angeles, Colorado, Florida and Montreal, winning a Stanley Cup in 2007 with the Ducks.