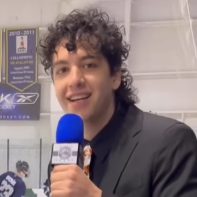 If Woodbridge is to repeat as the GMC champs, it will have to fight off challenges from St. Joseph Metuchen and Monroe.

The Falcons are out to avenge themselves this season after their loss in the Greater Middlesex Conference final last year.

The 2018 GMC champions will welcome back much of last year’s runner-up squad. This includes leading scorer and senior forward Dylan Batko, who posted 30 points last season. Also joining back is 2020-21 Rookie of the Year Nickolas Izzo. Another forward, he was second on the team in goals last season with thirteen.

Aidan Goetz returns to the blueline after winning Monroe’s Outstanding Defenseman Award last season. Vincent Amabile, who led all defense in goals and points, hopes to keep the strong production going in just his junior year.

In net, senior William Burkshot, who played the bulk of games last season, hopes to build upon his MVP campaign last year, where he registered a .900.

Joining the team this year is forward Aiden Grinshpun and defenseman Douglas Jorgensen. The two freshmen are expected to be difference makers.

The Falcons are a perennial threat to win the Greater Middlesex Conference title, and that will be no different this year.

A storied history for St. Joseph Metuchen includes nine GMC Championships and three Egan Cups. With the departure of top scorer Jason Pliszak, the focus will no doubt turn to incoming senior wingers Jack Pallota and Christian Cuccia, who each produced over 20 points last year. Hunter Mabee scored 16 goals as a freshman, making him a key part of the equation.

With a younger defensive group, senior Caden Miller will be relied on for not only production, but leadership as well. Juniors Brandon Adams and Andrew Sivulka will both make their return after strong sophomore seasons.

In net, Gavin Szilvasi and RJ Petersen will have tough skates to fill. Frank Bunks moves on from SJ-Met after putting up a sensational .931 save percentage. Szilvasi, the junior appeared in more games than the senior Petersen last year.

The 2022 Greater Middlesex Conference champions have three words on their minds as they head into the new season: back to back.

The reigning GMC Coach of the Year, Joe Rotella and his club went 16-3-1 last season, powered by a high octane offense. Top two forwards Ryan Lukko and Hubert Polchlopek tallied 95 points each.  Dylan Godsil and Braedon Rafferty were also key pieces of the offense, and Woodbridge is fortunate to have them all returning this year.

Returner Chris Walusz’ 27 points led all defensemen in points on Woodbridge. Joining him on the backend will be fellow veterans Aiden McCarthy and Ryan Zwiebel.

Hunter Galgani and Abby Karas combined for just 7 games last season, and will be expected to carry a heavier load this year. Coach Rotella expects a tight race in the GMC, with games against St. Joseph’s of Metuchen being pivotal in the race.

With 12 players graduated from last season, a young Edison team is eager to right the ship after struggling last season.

For coach Mondano, defense will be the key to improving on last year’s 4-14-1 record. Jacob Manley and Andrew DaSivla, two senior defenders will hold much responsibility. The two combined for 9 points last season, but higher production all around will be crucial.

A fresh start is exactly what the Knights are looking for after a last place finish in the Greater Middlesex Conference last year.

Points were not easy to come by last season, but leading scorers Chris LoCicero and Michael Pellicota will be back after each recording 13 goals. LoCicero’s eight goals led the team as he now enters his senior year alongside fellow senior Shane Culley, another one of Old Bridge’s top forwards.

Sophomore blueliner Dean Hoffman impressed in his freshman year. Fellow returners Patrick Apgar and Kenneth Doctors are expected to both play forward and defense. Goaltender Logan Schroeder, who earned the starting position as a freshman, will be key in the Knights’ success.

Coach Fisher expects speed to be his team’s bread and butter, hoping incoming players Anthony Fattorusso and Shane Albrect will be quick to adapt to his team’s identity.

** South Brunswick will also participate in the Greater Middlesex Conference this winter.