Ryder Wicken wasn’t about to waste another scoring opportunity.

Denied on two previous breakaways earlier in the contest, the elusive sophomore forward converted on a pair of breakaways in the third period to snap a 1-1 tie and Zach McErlain finished with 20 saves to help Gloucester Catholic, No. 4 in the most recent Hockey Night In Boston New Jersey Top 10, rally for a 3-1 victory over fifth-ranked Seton Hall Prep in a briskly-paced contest on Monday at Codey Arena.

Gloucester improved to 6-1-0 with the victory and handed Seton Hall (2-1-3) its first loss of the season. The Pirates were the last unbeaten club in the Gordon Conference entering the game.

It marked the fifth straight victory for Gloucester Catholic that included a 3-0 blanking of then-third ranked Don Bosco Prep on Feb. 12. The South Jersey school’s lone loss came in a 3-1 setback against top-ranked Christian Brothers Academy on Jan. 27. 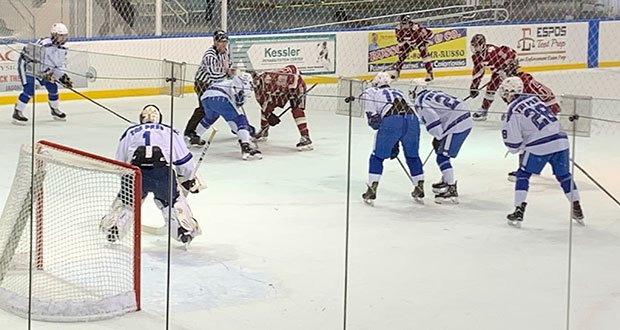 Gloucester Catholic got a pair of goals from Ryder Wicken to edge Seton Hall Prep, 3-1 in a key Gordon Conference showdown.

Locked in a 1-1 tie in the third period Gloucester Catholic’s swift forwards were able to get the puck deep for sustained shifts and disrupted Seton Hall’s breakouts. 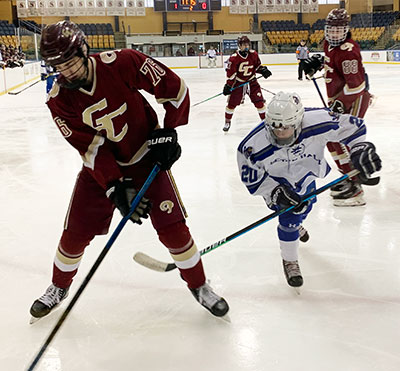 So then came Wicken, corralling a pass just outside the Seton Hall blue line before putting on a burst of speed to elude the defenseman. Wicken skated right down the slot and made a couple of dekes, refusing the shoot-first option he’d employed earlier, before backhanding the puck past Jake Schunke (14 saves) for a 2-1 Gloucester Catholic lead with 7:39 left in the game. Mike Hoffner and Tyler Parsels picked up assists on the goal.

“I had two breakaways before and I didn’t score on those so I decided to make a couple of moves,” said Wicken, who formed a solid forward unit along with Tyler Carter and Dylan Koski. “When I broke in I knew I’d have to make some moves instead of just shooting because their goalie was playing really well and is big. Speed is my biggest asset so that’s probably how I score most of my goals.”

Wicken added his second tally with 2:57 on the clock, this time accepting a nifty pass from Ryan Talorico before beating the defenseman wide down the left wing and cutting across the slot to slip the puck into the goal for a 3-1 lead.

This was a fast-paced, high energy contest for the entire 45 minutes, a game that went without either team being whistled for a penalty. Both goalies – McElrain of Gloucester Catholic and Schunke of Seton Hall played superbly – and the board battles were often and without any nastiness.

Seton Hall, which pulled Schunke for the extra attacker with just under two minutes left,  held a 21-17 overall advantage in shots at the final buzzer.

“We’re a pretty fast team so we try to be aggressive,” said Gloucester Catholic coach Tom Bunting, whose club will skate against Delbarton on Friday. “We wanted to put pressure on them as much as possible. This is still a very young team and we have a lot of sophomores. We don’t score a lot of goals but we seem to manage to find a way to score just enough and at the right time. But Seton Hall is a really good team. In all the years I’ve been here as an assistant coach and head coach this season is by far the deepest and most parity I’ve seen in the Gordon Conference.”

Gloucester Catholic outshot Seton Hall, 7-6, in the first period but it was the Pirates that struck first when Aidan D’Urso converted a feed from Thomas Klochkov with 7:10 left for a 1-0 lead.

Schunke then denied Wicken for the second time to preserve the lead, but Gloucester Catholic swung the momentum back in its favor and knotted the game at 1-1 when Billy Sheridan snuck down unchecked for a weak-side rebound with 3:01 left. Casey Johnson and Ryan Bunting assisted in the equalizer.

Wicken nearly gave his team the lead before the final buzzer of the second but Schunke denied his wrister with just five seconds on the clock.

“We had a great effort but they forced us into some turnovers in the third period,” said Seton Hall coach Mike Atkinson. “They caught us napping a couple of times and took advantage of those mistakes. Jake played a great game for us in goal and I thought we played really well but if you blink a couple of times the puck can end up in your net. Gloucester is fast and they stretched our forwards and defensemen and attacked off the rush. This was two good teams playing at a fast pace today.”