The state’s top league saw four teams, all in the American Division, separate themselves from the pack this season, but several competitive darkhorses lurk farther down the standings.

In the National Division, Pope John (13-5-2) is trying to hold off Gloucester Catholic (5-9-3) and St. Peter’s Prep (6-7-2) in a fascinating race for the division title and the chance to move up to the American Division next year. St. Peter’s Prep plays both this week and is riding a four-game win streak that includes beating St. Dominic’s (Maine) and Notre Dame (Fairfield, Conn.) in a mid-January tournament. Seton Hall Prep (3-9-3) and Bishop Eustace (2-12) are struggling to keep up, although Seton Hall Prep tied Delbarton and has not been blown out this year, but all 10 Gordon Conference teams will make the postseason.

The Shore Conference’s four divisions have each seen tight races, albeit in very different ways. In Shore A North, CBA (17-4) has dominated everybody except Middletown North (11-1-1), escaping a furious third-period comeback by the Lions 4-3 in their first meeting on Jan. 4. The teams meet again on Tuesday with a share of the division title on the line. Howell (10-5) is a state-title contender in Public A, having lost only to the top two and No. 7 Glen Rock, led by the scoring of Anthony Gallicchio (17-21-38) and transfer Tim Clifton (13-10-23) and the goaltending of Bobby Dovenero. Manalapan (8-7-1), Freehold Township (7-9-1), and surprising Marlboro/Holmdel (5-8-3) all have hopes of reaching the .500 record required for state-tournament qualification as of Monday, Feb. 8, while Freehold Boro/Raritan (3-15) pulled off a 3-2 upset of Central Regional to highlight their campaign.

Shore A South offers perhaps the most wide-open division, as Jackson Memorial (7-4-3) and Southern Regional (10-4-4) battle for the top spot ahead of traditional power Brick Township (6-6-3) and Toms River East (7-5-1). Jackson, led by Mike Termine (14-17-31), has lost just once in division play, splitting with Brick and tying Southern twice, and controls its own destiny with two games in hand over each of the other two. Early-season favorite Southern enters February winless in five games despite the scoring efforts of Matt Scalvino (18-14-32). While Brick is led by a pair of 17-goal scorers in John Maloney and Michael Mooney, Mayor’s Cup champion Toms River East boasts one of the state’s top offenses, averaging 5.8 goals per game behind Zach Noble (31-18-49) and Patrick Hofmann (18-22-40). Toms River North (3-7-5) and Brick Memorial (4-8-3) have occasionally played spoiler, while Toms River South (1-12-1) knocked off rival Toms River North in their third meeting of the year. 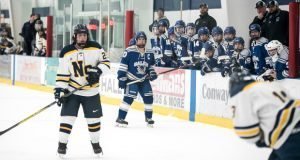