In a classic matchup between the state’s top two teams, Don Bosco Prep (15-4-3) won its first Gordon Cup championship ever (the tournament dates back to 1959) on an overtime goal from Griffin Welch. As in the teams’ previous meeting, a 4-1 Don Bosco Prep win on Feb. 4, the Ironmen went in front by capitalizing on power plays, as defensemen Connor Healey and Cody Calcagno both struck with the man advantage. Calcagno’s goal, with 6.3 seconds remaining in the second period, made it a 2-1 game. Delbarton (18-4-3) tied the score on a Tyler Kobryn rebound midway through the third period. Don Bosco Prep outshot Delbarton 26-21 in the game and became the first team in eight years to beat the six-time defending private state champions multiple times in one season. The two could meet again in the private state final on March 9, but both will face big challenges in the quarterfinals and semifinals just to get there.

Instead of holding two cup tournaments, the Shore Conference opted to follow the lead of its other sports and play one tournament consisting of 16 teams. While the format had some detractors, the tournament itself produced some unforgettable games. Six of the tournament’s 15 games, including both semifinals, went to overtime, with three of those going all the way to a shootout.

In the end, top-seeded Red Bank Catholic (19-1-3) survived a 4-3 quarterfinal against Ocean Township / Shore Regional and a 2-1

overtime semifinal against Point Pleasant Borough before cruising to a relatively comfortable 6-2 win over Howell (16-6-2) in the final. The Rebels had edged Monsignor Donovan 1-0 in the quarterfinals and St. Rose in a seven-round shootout in the semifinals. The Caseys, who suffered their only loss of the season in December against St. Peter’s Prep, were led in the tournament by sophomore forward Evan Hoey (3-5-8) and junior forward Todd Goehring (1-7-8), while junior forward Griffin Hurley (3-1-4) scored the overtime winner in the semifinals. Senior goalie Mike Cosentino stopped 98 of 106 shots in the tournament. 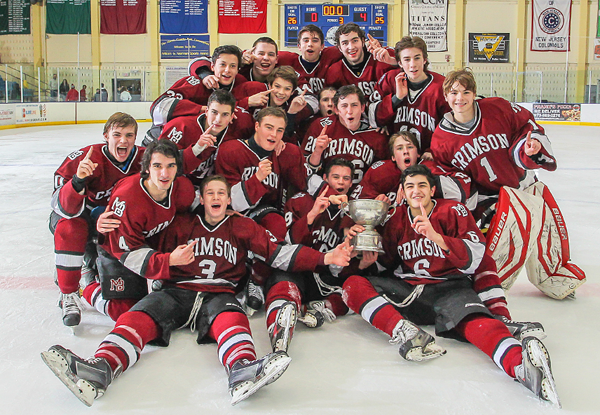 In a surprisingly lopsided contest, Daniel Porth made 26 saves and Luke Moser provided three assists as Morristown-Beard (17-5-1) prolonged Chatham’s Mennen Cup title drought. Top-seeded Chatham (16-3-4) has now failed to win the Mennen Cup in the 26 years since Chatham Township and Chatham Boro merged, although the Cougars – who edged Kinnelon in the semifinals – remain one of the favorites in Public B. Morristown-Beard has now won four of the last six Mennen Cup titles and five in the 10 years since Delbarton left for the Gordon Conference.

Notre Dame’s bid for a third consecutive county title was derailed by prep school Hun, which is not part of the NJSIAA and which competed in the tournament for the first time since 2009. Evan Barratt, Jon Bendorf, Blake Brown, and Bobby Wurster all scored for Hun (17-7-1), while Dakota Skove and Jess Manyoky struck for CVC Colonial Division champion Notre Dame (18-7).

The Cougars won their third cup title in four seasons, with Rob Jaworski assisting on all four goals and Devin Pepe producing two

The Skyland Conference’s top two teams added another chapter to their bitter rivalry, as Ridge (13-5-6) scored two goals in the final 8:23 to deny Bridgewater-Raritan (17-4-3) a second straight league championship. The teams had split their regular-season meetings 1-1-1, but Bridgewater-Raritan topped the standings. The Panthers opened the scoring via Tyler Darby, but Gavin Kirkwood answered just 22 seconds later for Ridge, and sophomore Vanny Charleson notched the game-winner, his first goal since January 18, with 1:15 remaining. Junior Sean Sweeney made 45 saves in net for Ridge.

Connor DiTomaso scored twice and Chris Butryn provided three assists as Ramsey (24-2) held off underdog Ramapo (9-11-3) to complete a 19-0 season in divisional play and claim a second consecutive Big North Green championship. Quinnipiac verbal commit Alex Whelan had a goal and two assists for Ramsey, while Chris Raymond made 24 saves for Ramapo, which had reached the final on the strength of a three-goal third-period comeback to set up a shootout win over Wayne Hills in the semifinals.

Glen Rock (21-2) went back-to-back in the Silver Division, holding off perennial bridesmaid St. Joseph Montvale (15-8-1) by a 3-2 margin. The Green Knights lost in the Big North Silver final for the fourth year in a row. Mike Buckel set up two goals for Glen Rock, while Matt Roy, Brandon Rosario, and Jake Kinney found the net.

In the Gold Division, Ridgewood (19-5) used a dramatic goal from senior captain Alex Linton with 1:02 remaining to complete an unbeaten divisional season (16-0) of its own and win its third title in four years with a 3-2 win over Paramus Catholic (15-6-2). The Paladins had opened up a 2-0 lead in the first period, but the Maroons came back with goals from J.P. Kelly in the second period and Chris Cornwell early in the third before Linton capped the comeback with the late winner.

There were no surprises in Union County, as Summit (16-5-2) and Westfield (10-8-3) met in the final for the fourth time in five years, and top-seeded Summit pulled away with three goals in the third period, two set up by Riley Flynn, to take its fourth title by a 3-0 score. Only Westfield’s win over Summit in last year’s final has kept the Hilltoppers from winning five in a row. In this year’s penalty-filled final, Chris Zanelli scored the game-winner 3:07 into the third period and Liam McLaughlin added some insurance at 6:13 before Corey McManus sealed things with an empty-netter.

After a regular season in which St. Joseph Metuchen (12-5-2) slipped from No. 4 in the state into a three-way tie with two unheralded public schools for the league regular-season title, the Falcons brought their A game in the postseason, posting a 9-0 rout of Old Bridge (16-4-1) for a third straight cup championship. After missing several top scorers for much of the regular season, the Falcons are the healthiest they’ve been all year, and Felipe Rodriguez and Louis Ferrara posted three goals and three assists – each – while Marc Johnstone added five assists. 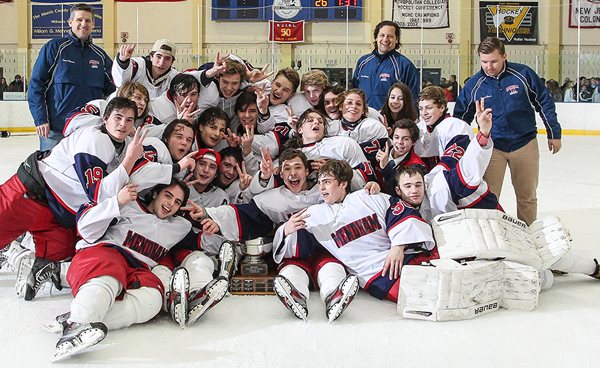 An overwhelming favorite to take its second straight Halvorsen Cup title, Mendham (17-4-3) looked like it in the first period, jumping out to a 4-0 lead, but had to hold on down the stretch in a back-and-forth 6-4 win over Pequannock (12-9-2). Northeastern verbal commit Grant Jozefek (40-52-92), a sophomore, and linemate Paul Michura, a senior, each had a goal and two assists for the Minutemen, while Rocky Rovero set up three of Pequannock’s four tallies. The Golden Panthers had reached the final with a 4-3 overtime win over Sparta and an 8-6 upset of second-seeded Roxbury.

Overtime is the norm in the Haas Cup: This year’s championship game was the fourth consecutive that went beyond regulation. Having fallen in overtime in last year’s final, Mount Olive (13-9-1) successfully avoided a sense of déjà vu by knocking off second-seeded Madison (16-7-2) 3-2 to win its first title of the 15 Haas Cups that have been contested. Seeded fifth, the Marauders edged Newton / Lenape Valley 4-3 in the quarterfinals before producing the shock of the tournament with a 4-2 win over top-seeded Montville (20-2-2) in the semifinals. In the final against Madison (an overtime winner over three-time defending champion Park Regional in the other semifinal), Mount Olive got 30 saves from Jordan Bustard and two second-period goals from Ethan Hendrickson to take a 2-0 lead. Madison tied it with 3:30 remaining, but Matthew Sanchez struck for the win – from a Hendrickson assist – less than three minutes into overtime to give Mount Olive its first title. 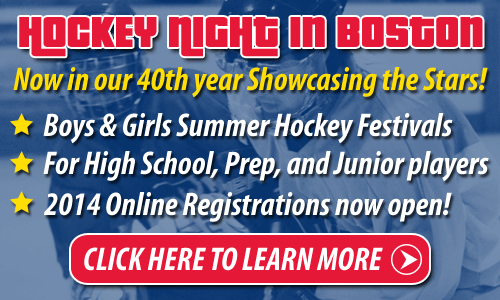