St. Joseph Montvale (17-7-2) – Once a proud power, St. Joseph Montvale is raising expectations once again after reaching the private quarterfinals last year. Up front, plenty of firepower returns in seniors Ryan Grieco (16-13-29), Matt Cocciadiferro (12-12-24), and Nick Krasniqi (12-11-23) and juniors Pete Lombardi (19-14-33) and Dom Posta (13-14-27). But the Green Knights have been forced to deal with unexpected absences on the blue line due to two transfers and illness that could sideline senior captain Ed Klein; Cole Garabed, Brian Quinn, and the new trio of sophomore Chris Thomasian and freshmen Adam Antal and Connor Grieco will be tasked with stepping up. Junior Pat Lynch is expected to take over in goal for Robbie Massimi, who keyed last year’s upsets, supported by Alex Casino.

Glen Rock (21-4-3) – Seemingly always a power both in the Freedom Division and in the Public B ranks, Glen Rock should be a favorite once again. A shut-down defense is anchored by senior goalie Matt Rosario (.911, 1.97), with seniors Tom LaMacchia (14-20-34) and Eric Spada and junior Brendan Murray key on the blue line. Up front, junior Jake Kinney (16-30-46) is chasing the school points record jointly held by older brother Jimmy, while Justin Rosario (14-18-32) also provides plenty of production.

Paramus Catholic (14-8-3) – Heavy favorites in the Patriot Division, the Paladins have excellent goaltending in senior John Pitera (.911) but will need some new faces to contribute on defense. Up front, seniors Athony Caporrino (13-13-26) and Matt Rainey (14-18-32) should have no problem putting the puck in the net.

Tenafly / Cresskill (11-10-2) – After playing without a co-op partner for the last four years, including an appearance in the Public B final in 2011, Tenafly welcomes back Cresskill as a partner this year, and the Tigers will move up to Public A as a result. They should be competitive behind the top two in the Freedom Division, led by junior Kyle Picinic (.923) in goal and senior defenseman Daniel Jayson (16-16-32), who never seems to leave the ice. Up front, senior Nick Rosato returns with a big sophomore class led by sophomore Julian Tallier (12-25-37) alongside Andy Chang and Nic L’Heureux. Don Bosco Prep transfer Matt Brown and freshman Socrates Raftis could be key additions.

Ridgewood (10-9-3) – The Maroons should once again be contenders in the Patriot Division, led by senior sniper Brendan Buckley (9-6-15), with classmate Matt Cafarella (3-11-14) moving up from defense to join him and junior J.P. Kelly (10-14-24). If senior Cooper Telesco (21-9-30) can return from offseason injury, Ridgewood could thrive in the second half of the season. Senior captain Harry Bahrenburg (7-5-12) anchors the defense in front of first-year starter David Woodford in goal.

Ramsey (25-4-1) – After back-to-back appearances in the Public B championship game, head coach Bob Toy joined one of his greatest senior classes in leaving, but the Rams should still be strong in their first season under Dean Portas. While replacing Alex Whelan (47-31-78) is impossible, Ramsey does return four experienced seniors capable of filling their top lines in Garrett Mast (10-12-22), Kyle Debel (9-21-30), Anthony Steffe (20 assists in the last two years) and Frank Steffe (14-9-23 in 2013-14). Defense may be Ramsey’s strong suit this year, as senior defenseman Brandon O’Callahan (5-12-17) and senior goalie Tyler Harmon are probably the team’s most talented players.

In the Freedom Division, the top three will be hard to catch. Northern Highlands (10-11-1) returns some scoring in junior Dylan Koh (12-8-20) and sophomore Joe Konvit (8-10-18), while Paramus / Lyndhurst / Hackensack (4-17-3) is hoping to move up the standings behind seniors Evan Kelly (21-21-42) and Thomas Foschini (7-20-27) and a strong crop of newcomers. Consistent Pascack Valley / Hills (9-10-6) will be looking to make the state tournament for a fifth time in six years, while Northern Valley / Hasbrouck Heights (5-18) continues to rebuild the program.

In the nine-team Liberty Division, two teams have high hopes of unseating Ramsey at the top of the standings. Lakeland (15-8-3) could threaten for the division title behind senior goalie Sean Komjian (.919) and senior forward Danny Mullin (110 career points). Senior Shane Davison and junior Andrew Heck also return at forward, with Chris Wands and Kyle Andreniuk on defense. Ramapo (5-12-5) returns virtually its entire roster, led by senior forwards Stephen Schwab (19-18-37) and Graham Key (16-13-29) and senior defenseman Alex Pazos (4-23-27), while senior Cort Fodi is ready to take the reins in goal.

The others start a little farther back, with Indian Hills (14-8-2) led by returning forwards Jon Hoogendorn (17-6-23) and Matt Paiotti (9-12-21). Mahwah (12-11-1) will try to follow the lead of senior Marty Kapoian (15-15-30), while West Milford (9-11-3) hopes junior forward Chris Dressler (29-16-45) can make a quick recovery from an offseason injury. Wayne Hills (13-8-2) could struggle to replace the scoring of Danny Reidel but should still have the edge over rival Wayne Valley (4-18-2). Finally, two programs that used to exist independently but did not play varsity hockey last year have combined to form DePaul Catholic / Morris Catholic for 2015-16. 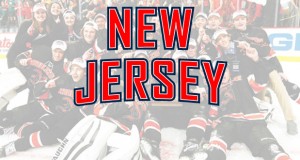 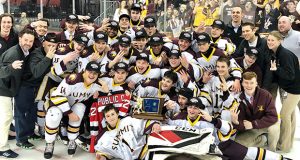 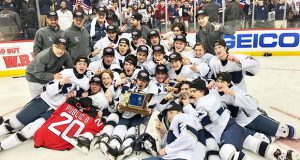