Kevin Doyle
Kevin joined HNIB in 1990 and is a Senior Writer and Director of the Northern New England and Mass/R.I. High School Division camps. A veteran editor/writer of 40 years in the print and digital mediums, he has edited and produced original content and coordinated production for local and global publications and websites. He holds degrees from Merrimack College and Boston University and won multiple industry awards as Sports Editor of The Daily News of Newburyport and News Editor of The Amesbury News. He is the 2016 recipient of the North Shore Lifetime Commitment From the Community award presented by Moynihan Lumber and a 2017 Newburyport High School Wall of Fame inductee. He resides with his family in Portsmouth, NH. Email him at [email protected] and follow him on Twitter @kdoyle40

Well, we pick up where we left off a year ago when Concord and Bedford were declared co-champions when the NHIAA cancelled Championship Weekend at the outset of the COVID outbreak. Both clubs remain among the division’s very best.

Adding a bit of intrigue this year is the return to Division I for the first time in 18 seasons of Keene, declared a Division Two co-champion last season.

No. 2 Bedford (16-3-1) boasts three of the division’s premier players at their positions in goalie Shea Guimont, forward Owen Roberto and defenseman Arhat Vaidya, all seniors.

No. 3 Salem (14-5-3) returns with a chip on its shoulder and some unfinished business as 11 seniors look to atone for last year’s early post-season exit. Forward Ryan Pappalardo (24-23-47) leads the way. 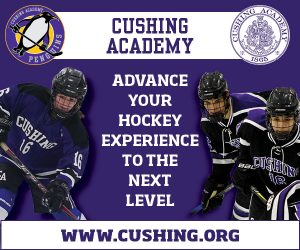 No. 4 Bishop Guertin (14-10-0) has the makings of another high-end club and will count on a quartet of veteran defensemen and a seasoned group of forwards while a new crop of goalies learns on the fly.

The approach for No. 5 Hanover (12-10-0) under its veteran coach Dick Dodds is simple: Approach every practice and every game with maximum effort as it could be your last of the season.

No. 6 Pinkerton (11-9-0) aims to improve upon last year’s quarterfinal appearance.

No. 7 Exeter (14-5-2) will lean on a deep defense after key graduation losses up front.

No. 8 Trinity (14-5-1) has had its season delayed by COVID and will need to come together quickly.