A three-goal outburst in just over two minutes early in the second period propelled Bishop Guertin to its first-ever New Hampshire girls state championship, a 6-1 win over St. ThomasWinnacunnet/Dover Saturday.

Both teams came into the game unbeaten and untied. The Cardinals ended up a perfect 17-0-0, while St. Thomas finished 18-1-0.

Bishop Guertin controlled play in the opening 15 minutes, but left the ice with just a 1-0 lead, despite enjoying three power plays and having a 16-2 advantage in shots on goal. 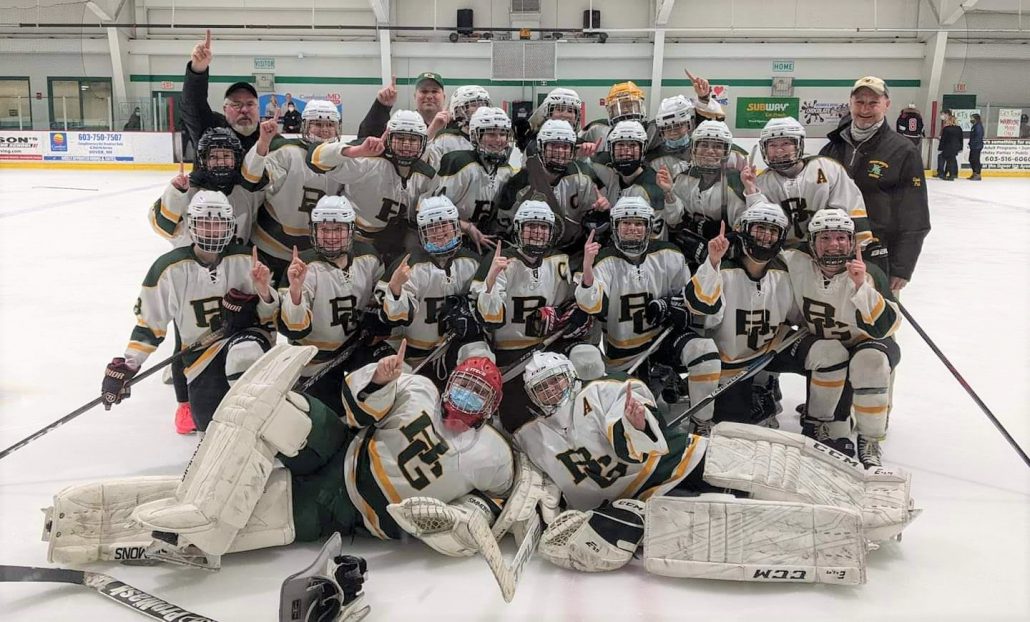 Bishop Guertin capped a perfect 20-21 season with the New Hampshire Girls State Championship with a 6-1 win over St. Thomas/Winnacunnet/Dover.

“During the intermission we had discussed strategies on how to focus our abilities at creating better scoring opportunities in the offensive zone, while we buckled down on pressure in both our defensive zone and neutral zone.,” said Bishop Guertin coach Scott Ciszek. “Although their goalie was phenomenal, she was going down a lot. The girls were to create more traffic in front of the goalie and move the puck from side to side to try and catch the goalie out of position, while breakaways were to go high over the shoulders or low looking for rebounds.

“The three quick goals were key, as St Thomas/Dover spent their time out. This showed our players that the other team was not ready for the pressure that we were applying and they needed to take that time to get a break and refocus. With that lead, it allowed us to change our play to a fairly less offensively aggressive and more defensive play to limit their break out and any possible breakaway possibilities.”

Senior Brooke Yabroudy notched the only goal of the first period for the Cardinals.

Then, 55 seconds into period two, Jill Scanlon made it 2-0 for BG. Shortly thereafter, sophomore Jenna Lynch connected, as did senior Lindsey Hult, and all of a sudden the Cardinals held a commanding 4-0 lead just 3:04 into the second period.

Olivia Kimball got one back for St. Thomas to cut the margin to 4-1, but they would get no closer. Kate Simpson scored to make it a 5-1 game before Lynch’s second of the day accounted for a 6-1 final.

It was early on in the season that Ciszek could tell his team was something special.

“Our first game of the season was against Concord who was a contender in the finals last season,” he said. “When we outplayed them, missing a couple of key players, we knew that our team had some serious potential. Playing against Berlin, Exeter, Oyster River and eventually Hanover only validated the potential that this group of players had. The girls just had chemistry from the start. They are skilled, work hard and are accepting of direction.

“The girls all season long worked hard, played as a team, supported each other and played great hockey. In this game they played three strong periods of hockey, which has been an issue with us in a couple of games, getting caught sleeping or watching. But, not in this game, they played hard the entire game.”