This could be very interesting. Undefeated Bishop Guertin (13-0-0) and St. Thomas/Winnacunnet/Dover (15-0-0) begin their State Championship quests Tuesday night and are on a path to meet in the NHIAA Girls State Title game on Saturday, March 13 at Dover Ice Arena (1:30 pm).

Under this year’s Open Tournament format with regionalized draws both are seeded No. 1 – STWD in Region One and Bishop Guertin in Region Two. As they are on opposite sides of the bracket, they would meet in a dream match-up for the title should they emerge from their Regionals and win their respective semifinals.

Getting there from here won’t be easy. STWD could face Oyster River/Portsmouth, a team that pushed them twice in the regular-season, in the Regional final. Concord (9-4-0) or Pinkerton (4-2-0) are possible semifinal opponents out of Region Three.

Bishop Guertin, should it win its Sectional, seems all but certain to face a re-match with Region Three top seed Hanover – whom the Cardinals beat in a battle of undefeated teams, 7-4, to end the regular season. The Marauders won 10 straight State titles from 2010-19 (11 overall).

Concord and Berlin‐Gorham were declared 2020 co-champions when Championship Weekend was cancelled at the outset of the COVID-19 outbreak.

Here’s a look at each team: 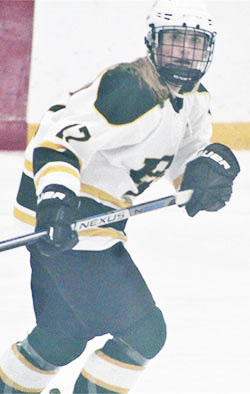 One game – a season-opening 8-2 romp past Concord – was all it took for Cardinals’ head coach Scott Cizsek to realize how good this year’s team could be. BG has obliterated its opponents by a 96-23 cumulative margin this winter.

“We knew we only lost a couple of seniors last season and we had incoming players that would make us a deeper, more talented team. We knew after our first game that we had a strong team that could potentially go far this season,” Cizsek said.

Three Cardinals – senior captain and defenseman Lindsey Hult, senior captain and forward Brooke Yabroudy, and junior forward Julie McLaughlin – have all eclipsed the 100-point plateau. Sophomore forward Jenna Lynch, who played junior hockey as a freshman, has more than 50 points this season alone while senior forward Kathryn Simpson is closing in on 100 points. Freshman Grace Menicci has enjoyed an outstanding debut season as a tough, puck-moving defenseman while senior Sarah King anchors the defense in goal.

“We have been preaching puck possession, pressure and execution, the key elements to their game. Additional keys to our success have been consistency and the ability of the team to adjust/adapt their play style upon request. We have three lines that will grind it out and are diligent about winning their battles, supporting each other and playing as a team. Our defense is solid with a mix of forward thinking defensemen [and] defensively minded defensemen, which gives us options,” Ciszek said. 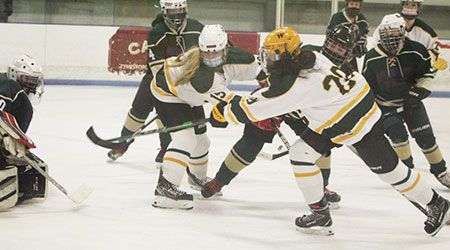 Sophomore Jenna Lynch, firing shot on goal, has been a big help to the BG offense, with more than 50 points on the season.

The win against Hanover won’t detract from the task now before the Cardinals.

“We will not focus on that game but we will use that game as a learning tool and refer to it when needed. As long as the players do not get over confident in themselves and they continue to push the envelope and play to their potential, we should fare all right in the playoffs,” he said.

Of a potential faceoff against St. Thomas/Winnacunnet/Dover, Ciszek said: “They are a stingy team as they do not give up a lot of goals, [It would] be a good match-up. As long as our team plays to their potential, I believe our players have it in them to persevere and make it to the finals. Time will tell.” 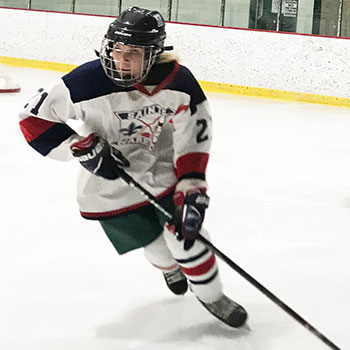 Senior Kylie Youngclaus has been an offensive catalyst for St. Thomas/Winnacunet/Dover this winter.

Coach Al Oliveira had a relatively good idea of the type of team he could have this season. Only two players graduated and everything came together with the addition of highly regarded sophomore goalie Diana Pivirotto, who played for Exeter as a freshman while attending a United States Performance Academy online high school.

“We had high expectations based on last season. In the second round of the playoffs we lost to Berlin (1-0, OT). They were on our schedule early and we would play them twice in 12 days. This is a team we have not beaten in the regular season and three other playoff games in eight years. In the first meeting we really wanted to show them that we could beat them and we did 3-0.  The second game, 12 days later, we beat them again by scoring with 54 seconds left to win, 1-0,” Oliveira said,

Five wins – the two against Berlin/Gorham, a 3-0 shutout of reigning co-champion Concord and 3-1 and 4-1 verdicts in the same week against Oyster River/Portsmouth, a team STWD hadn’t beaten in three years – defined the season. 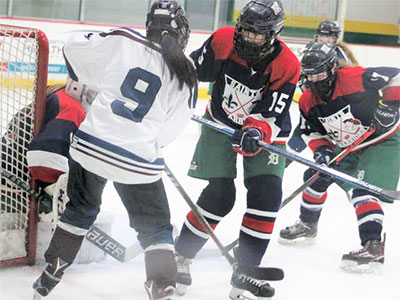 Making it through the season healthy was challenging. The team never had a positive COVID test but did have three regulars quarantined for two weeks due to contact tracing.

“We were able to make adjustments and continue to win. In general the biggest key was to have the players understand the ‘little things’ that need to be done regularly in order to be successful. The role models and leadership provided by the upperclassmen proved invaluable, especially since three of our top four defensemen are either freshmen or sophomores. We have a team that thinks ‘We’ and not ‘I’, important as we developed lines, defense pairings and chemistry,” Oliveira said.