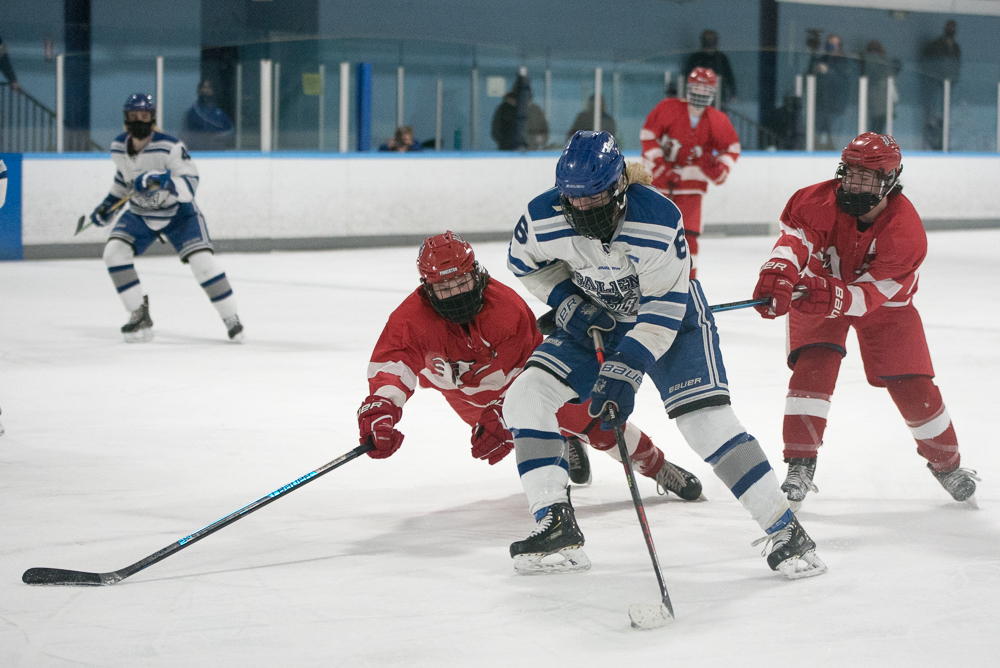 Salem’s Ryan Pappalardo moves towards the net with a pair of Pinkerton defenders in tow in the Blue Devils’ 2-1 win Saturday, advancing Salem to the D1 semifinals Wednesday against Bedford.

The Blue Devils (12-1-0) fended off the Astros in a tightly contested tussle at The Icenter. Following a choppy and scoreless first period, the Blue Devils broke through on an abbreviated power play in the second with Sam Maietta blasting home a loose puck from the left circle. After a penalty kill, Ryan Pappalardo scored the game-winner in the final minute of the period, set up by Ryan Allard. 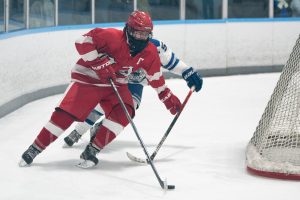 The Astros cut the lead in half on Lorenzo Corsetto’s SHG early in the third period but Salem goalie Spencer Deane (15 saves) stood his ground the rest of the way. Paul Lescovitz finished with 23 stops for PA.

Next up for Salem is Region Three winner Bedford in Wednesday’s early semifinal at JFK. The teams split regular-season games. Pinkerton closed at 4-6-0.

If the truism that it is difficult to beat the same team three times in a season is accurate, then it follows that doing so a fourth time is that much harder. That played out Saturday when Bedford – which lost three times to Exeter in the span of a week during the regular season – turned the tables on the Blue Hawks when it mattered most.

Anchored by junior goalie Matthew Desmond’s 30-save effort, the Bulldogs (9-5-0) opened a 3-0 lead in the second period and held off the Hawks’ closing surge in the third to advance to Wednesday’s semifinals. Sophomore Brendan Thornton sandwiched two goals around junior Derek Greer’s PPG in the second. Exeter fought back in the third on goals by tri-captains Sam Perry and Liam Walsh before Greer’s ENG sealed it with six seconds to play.

The Cardinals (12-2-0) overcame a stellar performance by Saber Titans’ junior goalie Colin Duckless at Cyclones Arena. After a scoreless first period, Guertin took a 1-0 lead on Sam Cronin’s bomb from the right point at 2:19 of the second period. Derek Amaral, set up by Sean Kelley, doubled the margin at 12:11 and the Cardinals carried that 2-0 lead into the break.

NNS made it interesting with Mike Dodge’s power play snipe from the slot at 6:13 of the third period. Guertin goalie John Casey protected the lead a minute later, denying Chase McBride’s jam job at the left post. The Cardinals restored their two-goal margin when Declan Wilkie scored from a tough angle off the left wall. Luke Vogel, at 11:39, and Mike Kiely, at 12:41, closed the scoring.