Dover Arena will be the place to be this week as crosstown rivals No. 1 St. Thomas Aquinas and No. 2 Dover square off twice in five days. The outcomes of those contests will go a long way toward clarifying or clouding how the final weeks of the regular season shake out.

STA took down No. 6 Merrimack Saturday, 3-1, in its only action of the week. It squeezes a Wednesday trip to No. 8 Alvirne/Milford between the Monday and Saturday dates with Dover. The puck drops at 7 both nights. 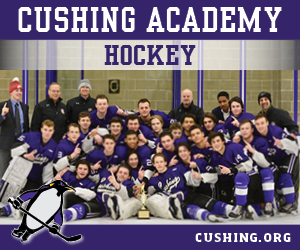 After falling to Oyster River on Wednesday, 4-2, Dover applied the brakes to its two-game skid by shutting out No. 10 Lebanon-Stevens/Mount Royal Saturday, 4-0. The Green Wave face Somersworth/Coe-Brown Wednesday between the two STA tilts.

No penalty for No. 3 Goffstown, which got doubled up by D1 Windham Saturday, 6-3. The Grizzlies upended No. 9 Kingswood Wednesday. They face off against D3 leader John Stark Hopkinton at home Wednesday and they are at home Sunday against Keene.

No. 4 Oyster River continues to rise, jumping three more spots this week. The Bobcats are 7-0-1 in their last eight after defeating Dover and tying No. 7 Portsmouth/Newmarket. Friday’s home match with Keene is OR’s only action of the week.

No. 5 Keene handled Winnacunnet, 6-1, in its lone game on Saturday. The Blackbirds get busy this week with Wednesday’s home game against Merrimack and trips to Oyster River Friday and Goffstown Sunday.