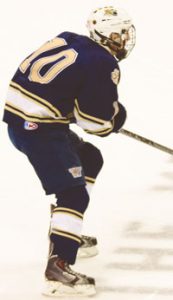 STA won seven of eight to close the regular season and advanced on Patrick Vetter’s second goal of the game, breaking a 3-all tie in the third period. Matt McLean and Keegan Youngclaus also scored. Noah Charron delivered a pair of power play goals for Goffstown. Max Lajeunesse also scored for the Grizzlies, who finished 12-7-0. 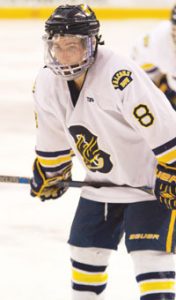 Despite being assessed a dozen penalties, including one major, the defending State Champs built a 3-0 lead through two periods to advance. Jimmy Harootian, Tim Anderson (assist), Brandon Madigan and Nolan Cunningham (shg) had the Jaguars’ goals. Jesse Frase scored in the final minute for Dover, which wound up 10-8-1.

The Falcons fought off a determined effort from the Clipper Mules to move to the semifinals. Doug Champagne’s first-period goal held through two periods, then Chris Mead and Austin Beaudette connected in the third period. Owen Kane connected for Portsmouth/Newmarket, which finished 9-11-0.

The Falcons overcame a 42-save performance by Spaulding goalie Ben Toussaint to advance to the semifinals. Tim Greenwood scored a pair of first-period goals; Nate Darwin and Brian Langevin added one each in the third period. Myles Ditkoff posted the 13-save shutout. Spaulding finished 9-10-0.

at The Rinks at Exeter