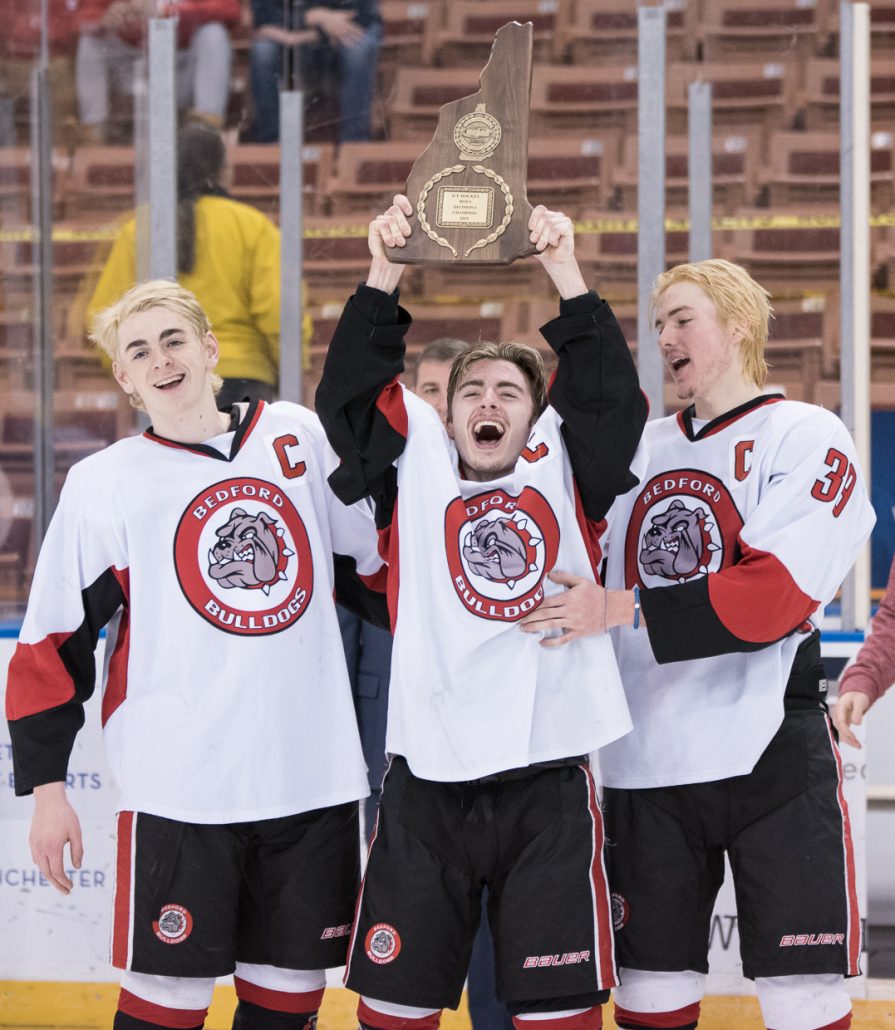 Parker Roberto wasn’t shy about expressing his feelings regarding a particular contest played three weeks ago. Roberto, Bedford’s senior sniper, lamented over an overtime loss to Trinity and how he, and the rest of his teammates, viewed it as a fluke. The Bulldogs knew that if they could get another crack at the Pioneers, they would justifiably prove that theory correct.

As fate would have it, the two programs did, indeed, meet up again in Saturday night’s NHIAA Division 1 state championship.

Here was a golden opportunity for No. 3 Bedford to stand behind its belief and prove to everyone that the last meeting was nothing more than a misnomer.

From the outset, the Bulldogs played like a team on a mission. They continued to punch Trinity in the mouth at every turn, relying heavily on their skills, speed and hockey I.Q. The end result was a one-sided 7-0 triumph at SNHU Arena. 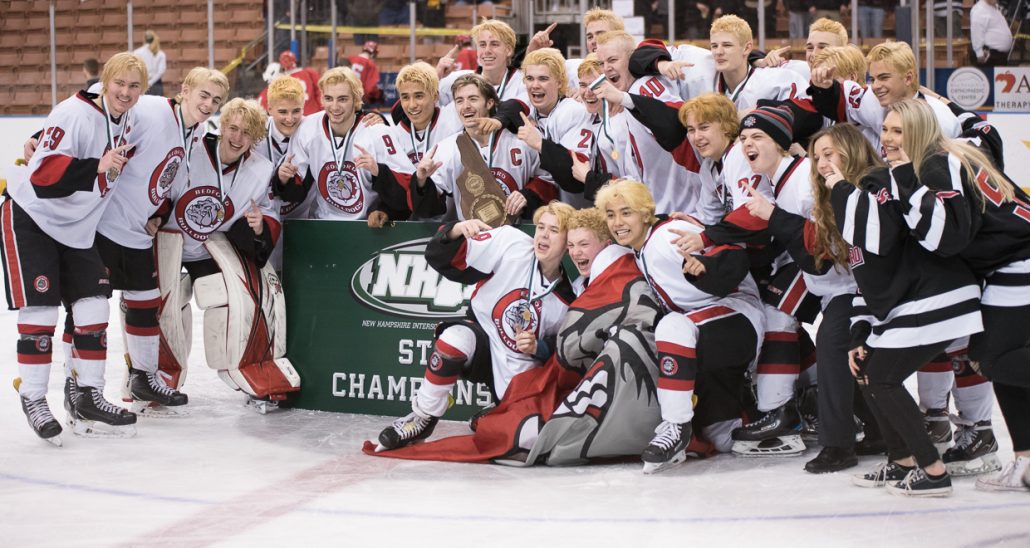 “There was a lot of anger from the previous game we played against them,” said Roberto. “We really wanted to show them that it was a fluke the last time. The outcome tonight was amazing. Before the game we all said that we were going to go up a lot on them and we weren’t going to stop. That is what our mentality was.”

For Bedford, the victory marks its fifth state title since 2013 _ three as a Division 1 program. The Bulldogs close out the season at 17-3-1. Against the fifth-seed Pioneers, who entered this tilt having won eight straight, Bedford laid the ground work early and never once let up as it outshot Trinity 42-17.

“The kids came out strong and put a lot of shots on net quickly,” Bulldogs coach Marty Myers said. “We wanted to put an aggressive forecheck on them and try to turn pucks over in their defensive zone and our offensive zone in order to get quick chances.”

Roberto paced the offense by tallying three goals. But all throughout, the Bulldogs, as a team, had their way against the Pioneers (14-6-1). They continued to pressurize the offensive zone by refusing to allow Trinity to dump the puck out. In addition, Bedford constantly sealed up the neutral zone, creating numerous turnovers in the process.

A backhanded rebound score off the stick of Quinlan Kerr put the Bulldogs up 1-0 at 12:57 of the opening period. In spite of the sheer domination put forth by Bedford in the frame, Trinity had to consider itself fortunate to be down just a goal.

The results remained the same throughout the middle period. Again, the Bulldogs continued to penetrate the offensive zone at will, as if the Pioneers were standing still. Trinity goaltender Ryan Brewitt needed to have eyes in the back of his head to account for the deluge of shots sent his way from every angle possible. In Brewitt’s defense, his teammates didn’t do him any favors as they allowed the Bulldogs to repeatedly crash the net and not pick up bodies skating down towards the crease area.

It proved to be only a matter of time before Bedford would finally start to pull away. The Bulldogs did just that. In the opening 1:23 of the period, Roberto netted a pair of goals to stake Bedford to a 3-0 lead. The flood gates were now completely open as the Bulldogs continued in their aggressive nature.

“We got a couple of quick ones to start the second,” said Myers. “I think the philosophy of us trying to get the puck to the net and getting second shots helped us a little bit.”

At 6:33, Cam Wasylak poked in a rebound in front of Brewitt to make it a four-goal advantage. Less than a minute later, Roberto, standing all alone at the left corner of the net, took a bouncing puck off the back wall and promptly whisked it by Brewitt to make it 5-0.

Later in the frame, Bedford was whistled for three straight penalties, giving Trinity a bit of hope on the power play. However, much like everything else that was working for them, so too, was the Bulldogs’ penalty kill unit, as they limited the Pioneers’ opportunities to literally nothing.

With this tilt well in-hand to begin the third, Bedford wasn’t finished quite yet. Jack Sylvain and Alex Lobdell each found the back of the net, adding to Trinity’s miserable evening.

“We are disappointed obviously,” Pioneers coach Mike Connell said. “I thought Bedford came out the more-experienced team. We played a little jittery and I don’t think we ever got off on the right foot. They kept us pinned a lot times and we couldn’t generate any offense. That hurt us throughout the 45 minutes. All the credit goes to Bedford. They deserved it.” 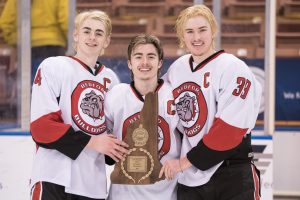 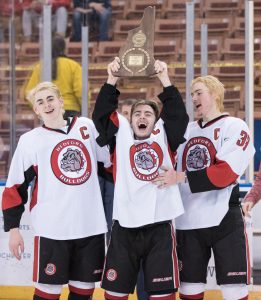 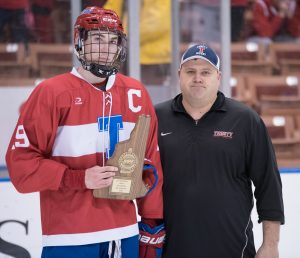 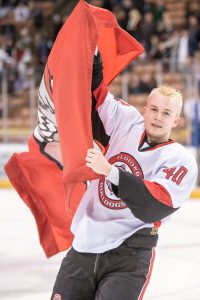 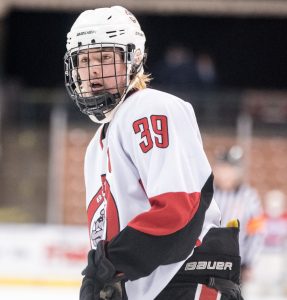 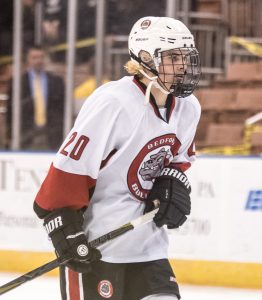 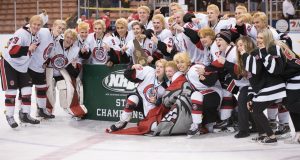