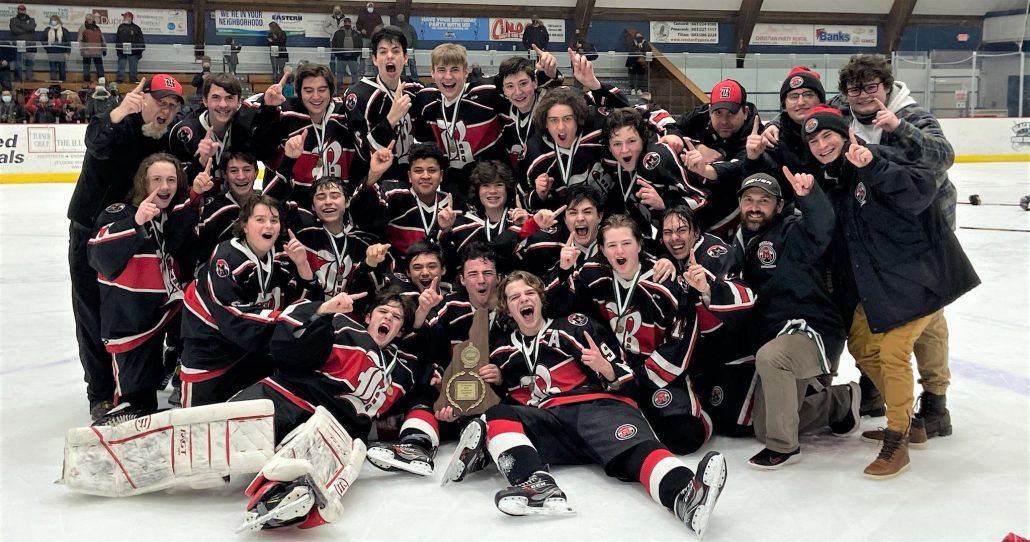 Berlin/Gorham captured its third NHIAA Division 3 title, and 12th overall, after a 5-1 win over Hollis-Brookline/Derryfield

Make that an even dozen and counting. Berlin/Gorham (14-2-1), buzzing from the start, captured its 12th State Title and third as a member of NHIAA Division 3 as it skated away from Hollis-Brookline/Derryfield, 5-1, Saturday night at Everett Arena in Concord.

Coach Mike Poulin said the Mountaineers’ quick start was an extension of the five-goal third period that propelled them past Lebanon/Stevens/Mount Royal in the semifinals and into the title match.

“That was a great first period. Our goal was to start the game the way we finished the last one. We did not want to get in a hole right off the bat,” he noted. Now, after a 39-season title drought, Berlin/Gorham has won three of the last six D3 titles.

“We had good speed entering their zone and some great drive to the net,” Coach Poulin said.

“This is a great group of players, many who were supposed to play in a final last year. They were playing for more than the team here; they were playing for last year’s seniors and also for our fall teams who did not get a chance to complete their playoffs. Our field hockey team was in the finals and they could not play the game and had to take a loss,” he added.

Rousseau opened the scoring at 5:25 of the first period, re-directing Carter Poulin’s shot from the point past Morgan. Sophomore Brody Duquette doubled the margin to 2-0 with about five minutes left in the period, scoring from a scramble. Rousseau’s PPG at 11:25 of the second period put the Mountaineers in complete control. Poulin and junior Ben Estrella drew the assists.

The Mountaineers kept coming in the third period and expanded the lead to 5-0 on goals from freshman Jamison Walsh and Rousseau. HBD senior Sal Vella broke Melanson’s shutout bid in the final two minutes.

The Mountaineers, 16-1-2 last year as a declared co-champion, are now 30-3-3 over the past two seasons. Meanwhile, what wasn’t much of a season for HBD (5-2-1) in terms of number of games played became ground-breaking as they played in the program’s first State title game.