New England Fall Prep’s Season 2 got underway over the holiday weekend with a dozen league games spanning both a U18 and U19Division. Play in this new season is expected to continue through January 2.

Ian Olenik had a pair of goals to power East to this win. Other goal scorers for the winners were Michael Ranaldi, Kyle Elliott and Colin Elliott. Brett Baldassare and Sean Donoghue scored for SNE.

A hat trick from Sean Senier of Holderness led Central to this win. Aidan O’Connell fired home a pair of goals, and Tommy Raymond (3 assists) and Christian Milward each scored. Nick Messina also had three assists for Central. Sergey Yakunin had two goals for the Avalanche.

East jumped to a 3-0 first period lead and held on after Central scored twice in the third period. Thomas Huard, Sean Thies and Cam Russo skated East to an early three-goal lead. Thomas Sullivan and Quinn McCarthy, both from Melrose HS, had goals for Central.

Trailing 3-2 entering the third period, West got goals from Kevin McElaney, Ian Worthley and Cameron Lowe (2 assists) to pick up their second win of the weekend. Lowe also scored in the second period, as did Nils Forselius. SNE got goals from Bryan Tang, Sean Donoghue and Conner Chalmers.

Goals by Sam Neville, Sam Stone, Will Conway, Dylan Shapiro and David Jacobs were more than enough for North.  South got goals from Sam Murray and Ryan Kavanagh.

The NH Avalanche scored all four of its goals in the second period in this tie. Nick Fontaine had two, and Owen Cross and Matthew Hale one each. For SNE, Jack Madden, Jackson Gates, Marcello Maitino and Nick Theodos all scored a goal apiece.

Southern New England played to its second tie of the weekend in this one. Among the goal scorers in this one were Nick Theodos and Jack Madden for SNE, and Reilly Piersimoni and Brayden Haggerty for East.

Quentin Moses, Caleb Belland, Nick Fontaine scored early on to power the Avalanche U16 to this win. Michael Bevilacqua had the lone goal for Central.

Robert Martufi’s third period goal enabled North to tie this one up. Sean Gray of Central Catholic also had a goal. Central’s Brendan Currie opened up the scoring in this one. 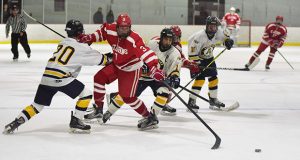