With a combined 10 private state titles in the last 11 seasons, CBA (3 titles, including one co-championship) and Delbarton (7) have made New Jersey a virtual two-horse race since 2005. While both will be strong again in 2015-16, several dangerous contenders lurk farther down the rankings.

The big boys are at the top, however, beginning with defending private champion CBA (23-5), which is looking for a share of its third straight private state title (the Colts shared the 2014 crown with Morristown-Beard). Having rallied for a dramatic win over Delbarton in last year’s state final, key returners like Ryan Bogan on the blue line, Michael Cernero in goal, and Cristian Winters and Derek Contessa up top have CBA primed for another run. As always, obligations to both the Gordon and Shore Conferences will preclude CBA from playing non-league games, but their Shore opponents include two of the state’s top public schools.

If any team has been a consistent thorn in the side of the top two, it is Don Bosco Prep (11-9-4), which reached the state final in 2013 and won the Gordon Cup in 2014. The Ironmen have the state’s top goalie in junior Alexei Masanko and steady leaders in senior defenseman Luke Campomenosi and senior forward Chris Mazzella. If underclassmen like sophomore forward Mickey Burns, junior forward Ryan McLinsky, and junior defenseman Chris McGee can rise to the occasion, Don Bosco is plenty capable of challenging for this year’s title.

For a public school, Middletown North (18-5-4) is absolutely loaded. Heck, for anybody they’re loaded: the defending Public B champions boast not one, but two Division I commits on their forward line in Northeastern-bound Bobby Hampton (54 points in 16 games) and Quinnipiac commit Khristian Acosta. Add in seniors Vince Tomasetti and Kevin Felice and goalie Anthony Manfredi, and the only question is on the blue line, where senior Ryan Davidson is the main holdover from the top four. Expectations are sky-high after the school’s first state title, but the Lions just might have enough firepower to match them.

It’s a bit of a jumbled pack after the top four, but private schools continue to have the edge. After a strong run to last year’s private semifinals, Bishop Eustace (14-7-1) returns third-leading scorer Aron Maguyon up front and third-year starter Cayden Primeau, a junior already verbally committed to Northeastern, in goal. With a veteran roster, any significant contributions from coach Mike Green’s underclassmen will make the Crusaders favorites for a second consecutive National Division title.

Still an outsider in the private-school ranks, Morris County power Morristown-Beard (16-7-4) could challenge for the title two years after their surprise co-championship with CBA. The Crimson are loaded with veterans on defense, led by senior Danny Port and twins A.J. and Christian DiCesare, while Alex Borowiec keys the offense.

Always a bit of a wildcard, South Jersey power St. Augustine Prep (9-8-4) moves up to the American Division this year. Senior Anthony Deruchie and juniors Carson Brière, Andrew Carpenter, and Matt Cassidy should pose a serious threat to any team in the state.

Another Morris County power, Morristown (13-12-3) checks in at No. 9. The experienced Colonials still have eight players from their 2014 Public B state championship team on a squad with 12 seniors, led by Bradley Greik and Jakob Deares up front and Kyle Beyer on the blue line.

Despite losing a lot of talent, Red Bank Catholic (18-6-3) rounds out the Top 10 thanks to the returns of dangerous forwards Evan Hoey and Alec Mintz, while Cole Kirchner leads the defense 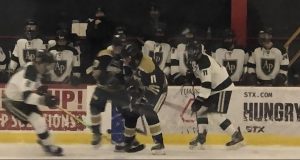