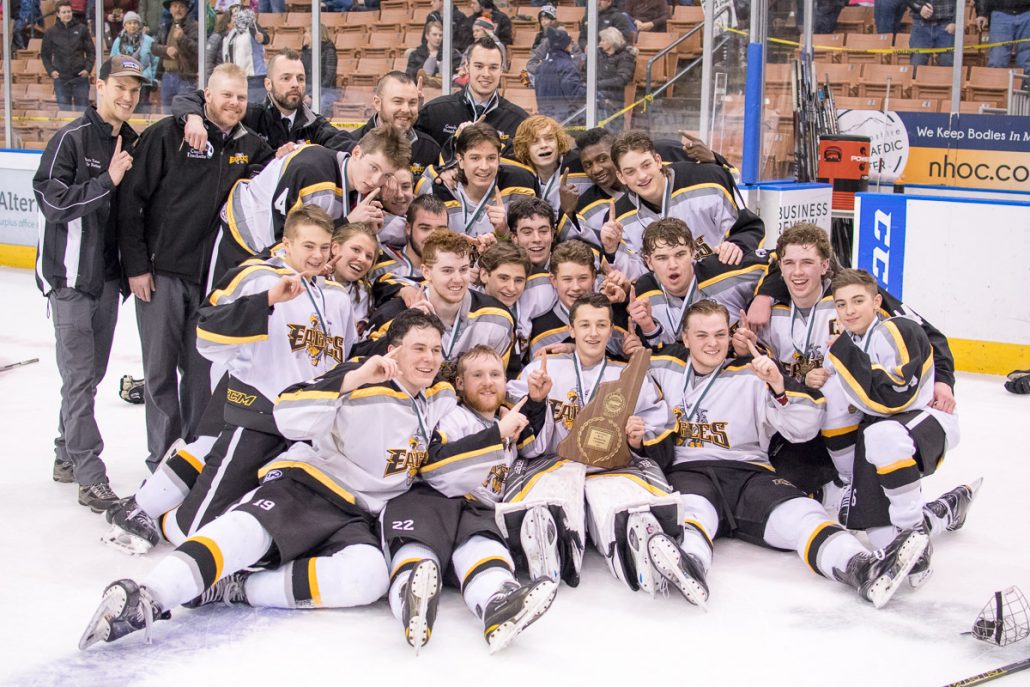 In discussing Kennett of Conway’s first State Championship since 2012 following its 4-0 shutout of defending champion Berlin/Gorham Saturday afternoon at SNHU Arena in Manchester, Eagles’ coach Mike Lane looked back at the genesis of this year’s team.

“I’m really happy for our seniors. They dealt with a lot of adversity. They came in as freshmen and were in the trough of our numbers dropping after our first run,” said Lane, referencing the span that produced five straight finalists and State Championships in 2009, 2010 and 2012. 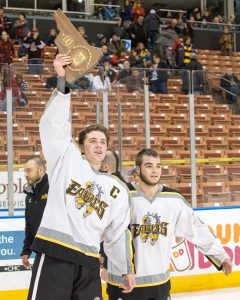 “Our junior class has been kind of our class that has led us to the resurgence here,” Lane said. “They were the kids that were running around the rink when we went through our first run so for them to get a piece of this, I know how much it meant to them.”

The Eagles played efficiently en route to this victory, controlling tempo throughout while building a 29-17 edge in shots to achieve the goal set before them following last year’s ouster in the semifinals.

“We pushed them hard all year. Our expectations were that we would be here. We had some injuries in the middle of the season, but we persevered,” said Lane.

No. 1 Kennett (18-3-0) exited the first period with a 1-0 lead, courtesy of junior Caleb McPherson’s first of two goals. It came on the power play off a goalmouth scramble that resulted with McPherson sneaking the puck between the pads of Berlin/Gorham goalie Trevor Labrecque (26 saves).

Berlin/Gorham mounted its most sustained offense of the game late in the second period but Kennett’s junior keeper John Biggio (17 saves) held firm. Then McPherson doubled the lead on an unassisted strike with 1:23 left in the period, sliding to the slot after a left dot faceoff and beating Lebrecque with a quick shot. 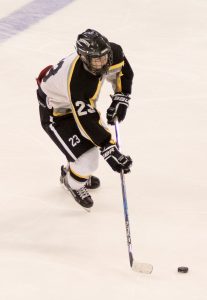 KENNETT’s Connor Doucet had a pair of goals in the 4-0 win. (Jamie Callery photo)

Lebrecque flashed his left skate for a larcenous save on Kennett’s Connor Doucet with 13:12 to play to keep his club within striking distance. Doucet, though, delivered the dagger with 9:01 remaining, accepting defenseman Mackenzie Murphy’s perfectly threaded stretch pass between two Mountaineers before zipping a shot over Lebrecque’s glove for a 3-0 lead.

Doucet concluded the scoring with an empty-netter at 13:47.

Lane cited a couple of factors that allowed the Eagles to control from the outset – depth and defense.

“We are one of the few teams that skate three lines in Division Three, so I think we had a little bit more left in the third period,” he said. “We have two juniors, a sophomore and a freshman on our defensive corps. I’m biased obviously, but I think they’re the best group in our division.”

Scary thing? Seventeen Eagles are eligible to return next winter should they choose to do so.

Meanwhile, No. 3 Berlin/Gorham – which graduated 14 seniors from its 2016 championship team and returned to the final with essentially a re-made squad under Coach Mike Poulin and his staff – finished 16-4-1. Fifteen players are eligible to return and it would be no surprise if the Mountaineers are in the mix to return to the finals for a fourth straight season. 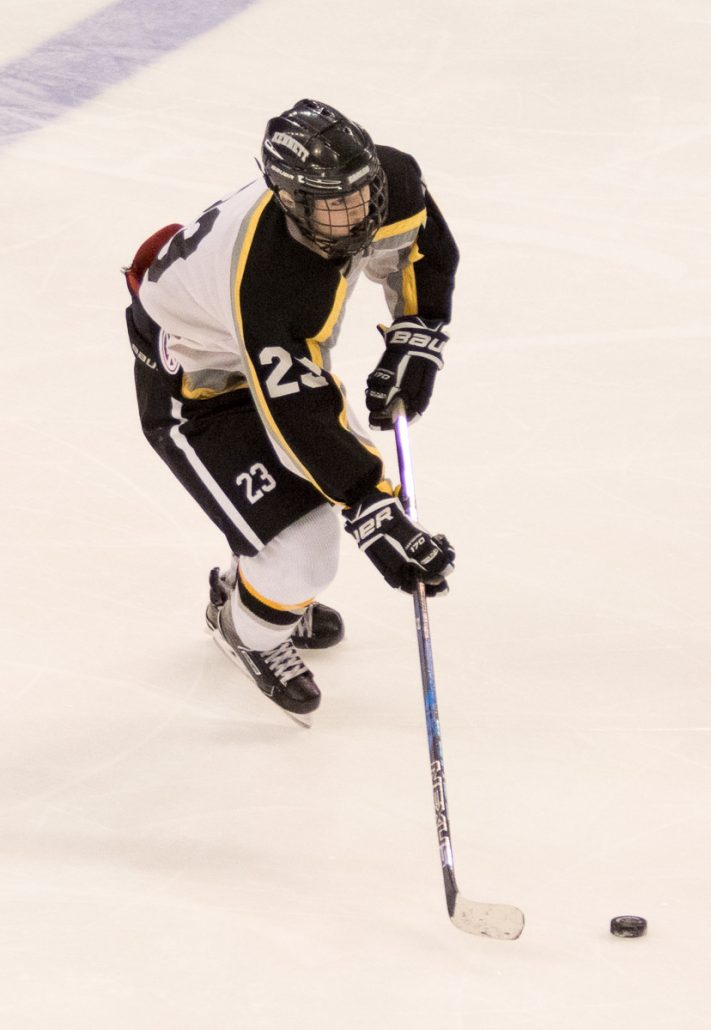 KENNETT’s Connor Doucet had a pair of goals in the 4-0 win. (Jamie Callery photo) 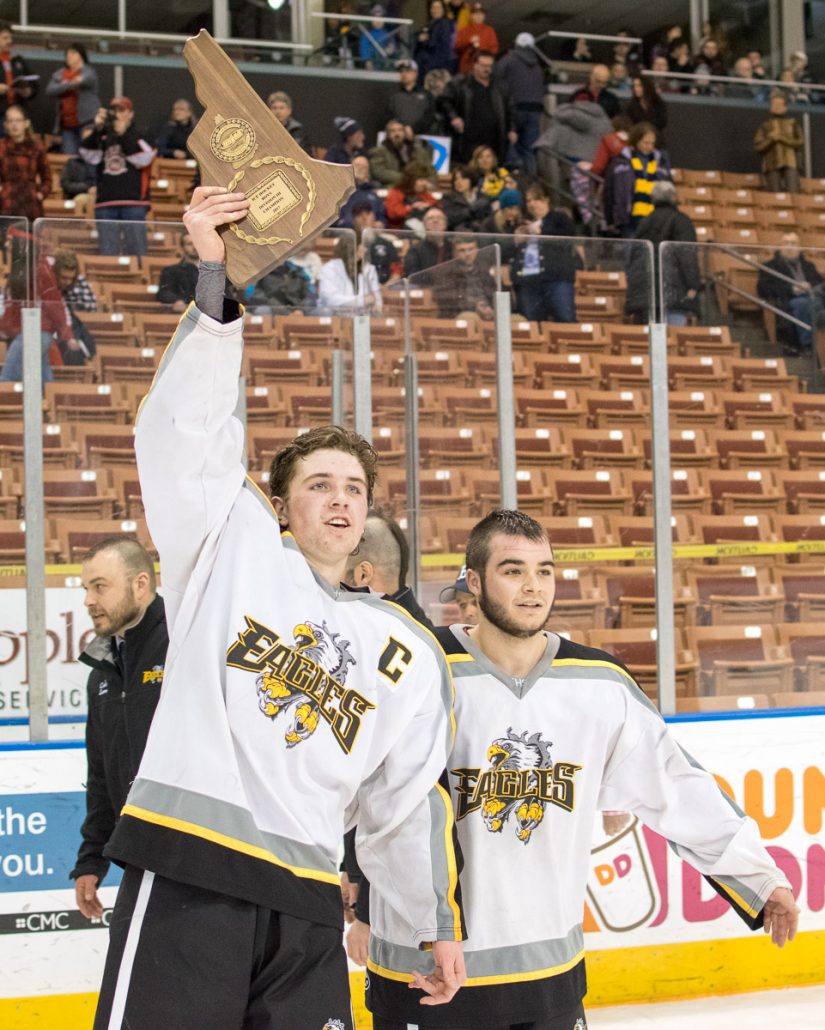 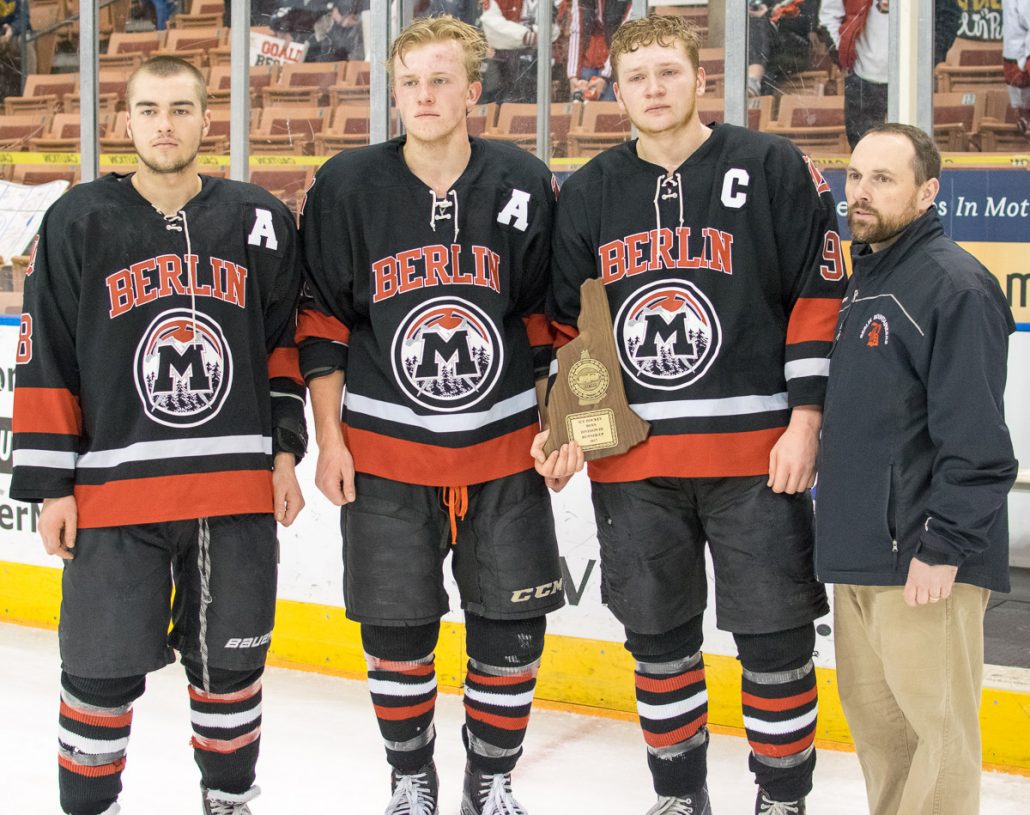 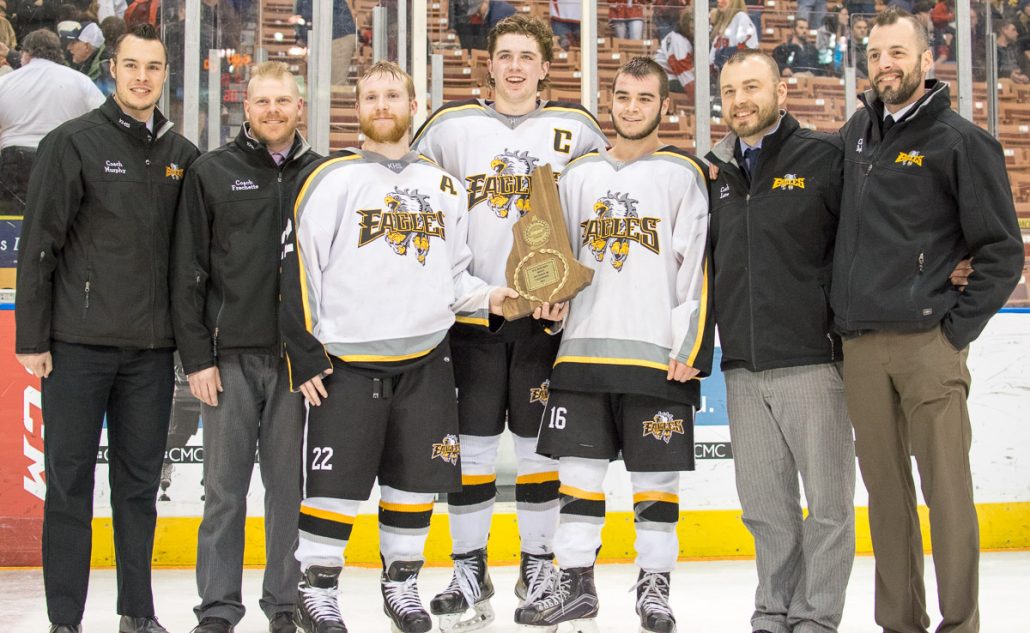