MVC/Dual County League One Preview: Race Could Be Tighter Than Usual

The Merrimack Valley/Dual County 1 loop had a solid season a year, boasting the Division 1 state champion (Waltham) and two Super 8 participants (Central Catholic, Andover). All three of those teams suffered key losses, which could mean a more competitive race this winter. 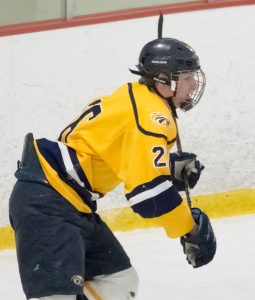 The Golden Warriors surged to the program’s first ever 1A Tournament berth last year. However, the loss of 10 graduating seniors and the transfer of both All-Scholastic goalie Cole Chingris and Mike Leone presents an interesting challenge for coach Chris Kuchar and his staff.

“The void at goalie will need to be picked up by a yet to be proven player, same as the defensive corps. But I like our team speed and depth at forward. We will be able to skate 12 forwards at any time and that could take some pressure off our back end,” Kuchar said. 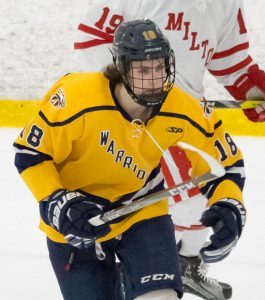 Depth will come from transfers back to the program and a sophomore group Kuchar said is as  strong as any sophomore class he’s coached. 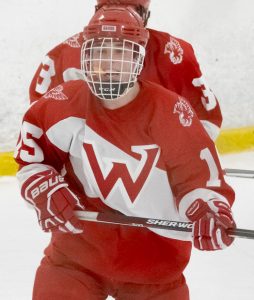 A senior-laden Hawks’ squad soared to the program’s first D1 State title in 16 years this past March. However, that was then and this is now with many of the key operatives having graduated, most notably stellar goaltender Kyle Penton. 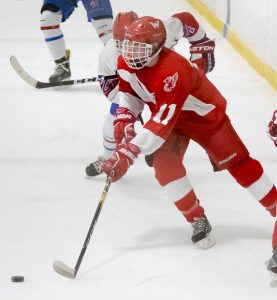 Senior forward J.T. Logue, who had the final goal in the title game, returns along with Cullen Millerick and Justin Moran. Mike Burke, DJ Caissie, Eddie Finney and Enzio Diblasi will form the core of the defense. Pre-season should settle the successor in goal. Look for new players Derek Pouliot and Anthony Attardo to make their mark.

The Lions will be led by eight seniors and a number of three-year players looking to jump back into contention and return to the post-season. Coach Kevin Leonard said focused three-zone play, especially in the offensive end, will be an absolute must.

“The league has never been more competitive with three teams (Central Catholic, Andover, Waltham) showing they could play with anyone the last year making the Super 8 and winning Division 1. Every night in this league is a grind and we’re excited to be able to compete in it,” Leonard said.

Due to graduation and transfers, new coach D.J. Conte inherits a team that doesn’t much resemble the juggernaut of recent years. A disciplined approach will be crucial for Central to maintain its accustomed level of play so expect a defense first, puck possession style.

Senior Steve Birch (3-7-10) leads a veteran defense in front of senior Zach LeTendre, who is likely to take over as the lead goalie. Senior Ryan Finneran, juniors Colin Ferris and Robert DiBiasio and sophomore Nick Peters all return on the back line.

With 10 experienced seniors and juniors returning, supplemented by a younger group poised to contribute, long-time coach Bob Carpenter thinks the Grey Ghosts are poised to make a positive move within the league.  “We hope to be competitive in what is always a very good league,” he says.

Seniors Mike Mucci and Jack Sepe are back on defense while senior goalies Roger Carter and Joe Cornetta will compete for time.

After falling just short of tournament qualification last season, the Indians will count on their added experience as they continue their move back to prominence under fifth-year coach Jim Egan. “Our focus is to get better each day in preparation to compete,” Egan says.

A large group of returning letter-winners and talented new freshmen will look to play complementary roles.

The Colonials will rely heavily on solid play by the senior goalie tandem of captain Connor Champigny and assistant captain Luke Laforest. Coach Kevin Robinson says the team will feature speed across its top three lines and count on the leadership of its captains group.