* Second-seeded Pope Francis exploded for four third-period goals en route to a 5-2 win over Hingham. Two goals by Trevor O’Brien had the Harbormen taking a 2-1 lead into the third period. The Cardinals’ Brandon Spaulding tied the game with 9:19 to play. Just under three minutes later, the first of two Makem Demers goals, assisted by Jon Tavella, proved to be the winning goal for Pope Francis. 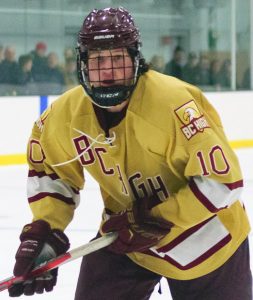 Max Cocchi also had two goals for the Cardinals. Pope Francis will now play BC High Monday night at 6pm at Stoneham Arena for the right to advance to the state title game at TD Garden. Hingham will now play Framingham in an elimination game Saturday at 6 pm (Chelmsford Forum).

* BC High also advanced with a 5-3 win over Arlington. The top-seeded Eagles got two goals each from senior Matt Lakus and sophomore Peter Kramer to pull away from the Spy Ponders. Thomas Kramer added an empty net goal. Drew Malatesta scored a pair of goals for Arlington. Will Jennings had staked Arlington to a 1-0 lead in the first period before Lakus and Peter Kramer responded to give the Eagles a 2-1 lead after the first stanza. Arlington will now play Xaverian Saturday at 8 pm (Chelmsford Forum).