#2 Pope Francis secured its spot in the MIAA Division 1A state title game, as Jon Tavella‘s late third period goal, his second of the game, gave the Cardinals a 3-2 win over top-seeded BC High. 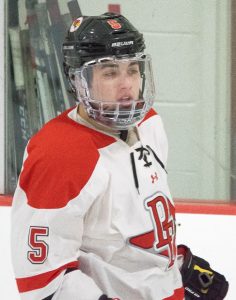 This was the two heavyweights third meeting of the season. BC High won 5-4 early in the year, and the two teams tied later on, 2-2. They also played in last year’s state title game, which BC High won, 2-1, in overtime.

If BC High can win Wednesday night against Xaverian (Loring Arena – 7pm), the Eagles will get another crack at the Cardinals in the title game.

Tavella’s game-winner came with just 2:21 to play as he buried a one-timer from the left side. Tavella also opened the scoring midway through the first period.

The Eagles tied it just nine seconds later on a goal from Thomas Kramer.

Defenseman Zach Reiser’s power play strike put Pope Francis up 2-1 in the second period, a lead they took into the third stanza. Again, BC High would tie it on a goal by Coleman Benson just after an Eagles penalty expired.

* In a loser’s bracket contest, #7 Xaverian continued its strong play, downing #4 Hingham, 3-1, for its third straight win in the tournament. The Hawks jumped ahead early, as goals from Matt Talarico and Matty Ryan propelled them to a quick 2-0 lead in the first period.

The score stayed that way until the third period, when Josh Barton, took a pass from Ryan Pomposelli and scored to make it a 3-0 game. Will Kenney got Hingham on the board with a little over two minutes to play. Hingham finishes the season at 19-6-1.