MIAA Super 8: BC High Earns Right To Defend 1A Title

BC High is ready to defending its MIAA Super 8 title, reaching Sunday’s final with a 7-4 win over Xaverian in Wednesday. Up next, a date with Pope Francis, Faceoff is 5:45pm at TD Garden. 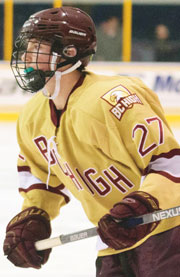 It will be a rematch of last year’s title game, won by the Eagles, 2-1, in overtime. It also will be the fourth meeting this season between the two powerhouses. Each team has won one and another ended in a tie. The Cardinals beat BC High 3-2 Monday in a Winner’s Bracket contest.

The Eagles trailed in this one 2-1 after the first period, but turned on the jets in the second period, scoring four times to take a 5-3 lead into the third period.

Brothers Peter and Thomas Kramer each scored a shorthanded goal in the third to push BC High’s lead to 7-3.

The Eagles tied it at 2-2 as defenseman John Logan scored in the first minute of the second period. Senior Matt Lakus put BC High on top for good 32 seconds later and Coleman Benson followed with a goal to make it 4-2. Matty Ryan closed the gap for Xaverian, but Thomas Kramer scored a huge goal in the final minute of the second period to restore the two-goal lead for the Eagles.

Peter Kramer had two goals for BC High. Josh Barton added a goal in the third period for the Hawks.