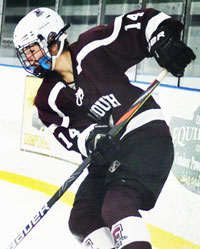 * Notre Dame Academy moved into the quarterfinal round with a  5-1 win over Natick, also avenging a regular season 4-0 loss to the Redhawks.  The Cougars got goals from five different sources – Cam Bourassa, Christine Landry, Ava O’Donoghue, Lauren White and Caelan Stewart. Natick finished  a solid season at 15-7-0.

* Cape rivals Falmouth and Sandwich had quite the first round contest, not settled until an Abby McDonald goal early in the second overtime gave the Clippers a 1-0 win and sent them to a quarterfinal game against another Cape rival – Dennis-Yarmouth, scheduled for Friday at 5pm at Warrior Arena. Falmouth and Sandwich, which ended at 18-6-0, had split two regular season meetings.