When the puck drops on the MIAA Girls Division 2 state final (Sunday, TD Garden, 9am), it will be a battle of contrasting styles of play. 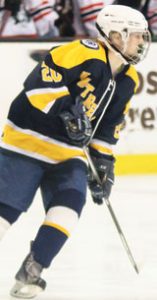 Defending state champion Notre Dame (22-0-1), despite losing some serious talent from last year’s club, has been dominant this season with a prolific offensive attack averaging four goals per game. The Cougars opponent, 14th-seeded Canton (14-4-6), has made a tremendous post-season run to get to the Garden, and relies on low-scoring, defensive games. Canton averages just over two goals a game, but has allowed just 27 in their 24 games. 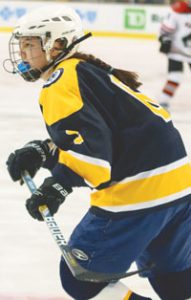 In our preview heading into the tournament, Canton coach Dennis Aldrich said his team “seems comfortable in low-scoring, high pressure games.” They have shown that to be true, winning four games by scores of 4-1, 3-2, 2-1, and 1-0.

The key to this game may be if the Bulldogs can contain Notre Dame’s prized pair of freshmen. Katherine Pyne has scored seven goals in the post-season, including six of the last seven Cougar goals (four in the semifinal win over Tewksbury/Methuen). She has 36 goals on the season. Fellow ninth-grader Skyler Irving (12 goals) is usually in the offensive mix as well.

Hingham coach Tom Findley, whose team played both Notre Dame and Canton this winter says that “Canton has good size up front, which may help control Pyne and Irving.”

Notre Dame, which has no seniors on its roster, can also look to the likes of sophomores Alexa Graziano (12 goals) and Kelly Morrissey (10 goals in the regular season) for offensive production.

The Cougars’ three junior captains – Emma Duffey, Meridith Stewart and Jillian Lyons – all patrol the blue line, anchoring a unit that has allowed just 25 goals all season. They also don’t mind getting involved in the offensive end of the ice. And in goal, freshman Erin Murray has been solid.

Canton loves to play a defensive-style and convert on opportunistic scoring.

Sophomores Maggie Malloy (17 goals) and Lauren Fitzpatrick (12 goals) have led the Bulldogs offensively. Senior Rebecca Eckler (7 goals) and junior Kendra Farrelly (7 goals) have both come up with big goals for Canton in the post-season.

Junior goalie Colleen Kelleher (1.09 gaa) has been the catalyst in the defensive end, backing up a young blue line crew that has developed nicely over the course of the season playing in the rugged Coastal Division of the SEMGHL. The Bulldogs are 12-1-5 in their last 18 games, allowing only 18 goals during that span.

“Both teams have great goaltending with Kelleher and Murray,” Findley said. “Both Malloy and Fitzpatrick are quality offensive threats for Canton. If they (Canton) stay disciplined and keep the game five-on-five, Canton will definitely have a chance.

“Both teams are very well coached. In the end, it may be a chess move that is the difference.”