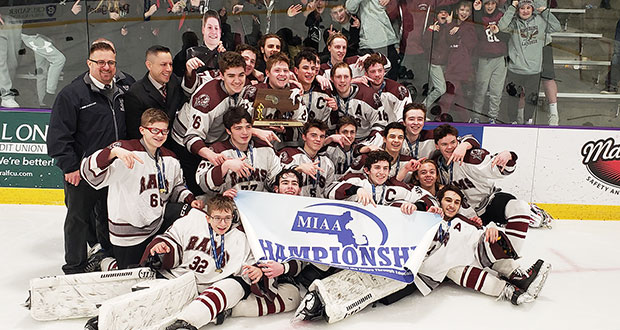 Northbridge and Easthampton were locked in a scoreless struggle for 35 minutes, 24 seconds until Owen Hogan  broke the deadlock.

Gill made it 2-0 with less than five minutes remaining before Brown closed the scoring with 22 seconds left.

“We came from nothing,’’ Gill said. “I just love this team so much. We believed in ourselves and I can hardly speak right now.’’

Ryan Couture fought off a check from behind the net and centered to Hogan, who was stationed at the lower edge of the right faceoff circle. Hogan wasted no time and snapped a quick shot that eluded Tyler Cortis for the game’s first goal.

Cortis certainly deserved a better fate. The rock-steady sophomore kept the Eagles in the game with a number of outstanding saves.

Northbridge goalie Christopher Wells (20 saves)  was outstanding, even though he did not face the volume of shots Cortis did.

Just when it appeared Northbridge had opened the scoring 2:22 into the second period, the Rams’ celebration was short-lived when the goal was negated  by the officials. Then Couture fired a high drive from 20-feet out that Cortis stopped with his chest.

Northbridge dominated the first period, which was scoreless, largely due to the effort of Cortis. The sophomore goalie rejected a breakaway bid by Gill midway through the period.

“We have a good group and they all worked hard,’’ coach Bill Grise said. “We came out a little flat in the first period, but I think we picked it up from there.’’