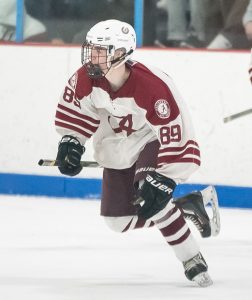 In Stoneham, the Spy Ponders (18-1-4) jumped on the Prep with three first-period goals and then turned things over to senior goalie Nathan Brennan (29 saves) to close it out as they extended their unbeaten string to 20 games (16-0-4). The Middlesex League Liberty Division champs haven’t lost since two days before Christmas when Pope Francis handed them their only defeat, 4-2.

Arlington’s first period blitz began with senior Brendan Pigott’s tally with 6:35 left in the period, set up by senior James Santagati. Goals by Santagati and senior Brendan Jones on the power play made it 3-0 by period’s end. SJP’s lone goal came in the second period when senior Ned Malolepszy converted on a 5-on-3 power play.

Arlington moves on to face Pope Francis in Saturday’s Winner’s Bracket final (Loring). In addition to that December match, the teams skated to a 2-2 tie in January. Next up for St. John’s Prep (12-5-5) is an elimination game against Catholic Conference foe Catholic Memorial on Wednesday (Stoneham, 6). The Eagles were 0-1-1 against CM in the regular season.

In Bourne, the Cardinals (15-4-2) advanced to the Winner’s bracket final, dropping two-time defending champion BC High into the Loser’s Bracket for the second straight year while handing the Eagles their first shutout of the year. If BC High is to three-peat it will once again have to do so the hard way. Pope Francis also clipped the Eagles, 3-1, during the regular season.

Junior Evan Phaneuf’s first of two goals proved to be the game-winner, coming at 4:33 of the first period. Senior Cardinals’ keeper Ben Zaranek (29 saves) protected that one-goal margin until Phaneuf and sophomore Jack Moltenbrey scored 53 seconds apart late in the second period to send Pope into the room with a 3-0 lead after two. Any hope the Eagles had about mounting a comeback were doused by freshman Ryan Leonard’s 28th goal of the year with 7:01 to play.

Pope Francis and Arlington square off in Saturday’s Winner’s Bracket semifinal, both seeking to complete a clean run to the title game at TD Garden on March 15. BC High (14-4-4) takes on Framingham in a Loser’s Bracket semifinal on Wednesday (Gallo, 6). The Eagles won a regular-season meeting, 2-1, on Jan. 2.

In Bourne, Flyers’ senior Will Trischitta did it again. Trischitta’s second OT tally of the postseason sent Bay State Carey Division champion Framingham (16-6-2) into Wednesday’s elimination round semifinal against BC. High and ended the season for Xaverian (13-6-4). Junior Hunter Balducci had the assist on Trischitta’s goal, which came with 1:51 left in OT with the teams skating 4v4.

Xaverian raced out to a 2-0 lead after one period on goals by seniors Ty Marchi and Ryan Pomposelli. However, as they did in a regular-season win against Xaverian, the Flyers roared back. Junior defenseman Jared Shimelman delivered a pair of second-period goals to tie it, 2-2, and Trischitta’s first of the game gave Framingham a 3-2 lead with 8:42 left in regulation. Pomposelli’s second tied it with 5:03 to play. 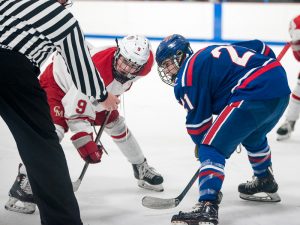 In Stoneham, Catholic Conference champion Catholic Memorial (9-7-6) came perilously close to having its season come to an end before scoring twice in the game’s final 3:09 to end the season for Middlesex League Freedom Division champion Burlington (16-6-4). Senior Mac Casper’s game-winner from the right circle with 34 seconds to play came off junior Glenn Considine’s sweet backhand dish from the rear wall.

All the scoring came in the final period. Burlington grabbed a 1-0 lead on junior Jacob Vozikis’s tally early in the period. Senior Zach Callahan tied it for CM with 3:09 to play. CM and St. John’s will battle to extend their seasons Wednesday night (Stoneham, 6). The Knights defeated and tied Prep during the regular season.