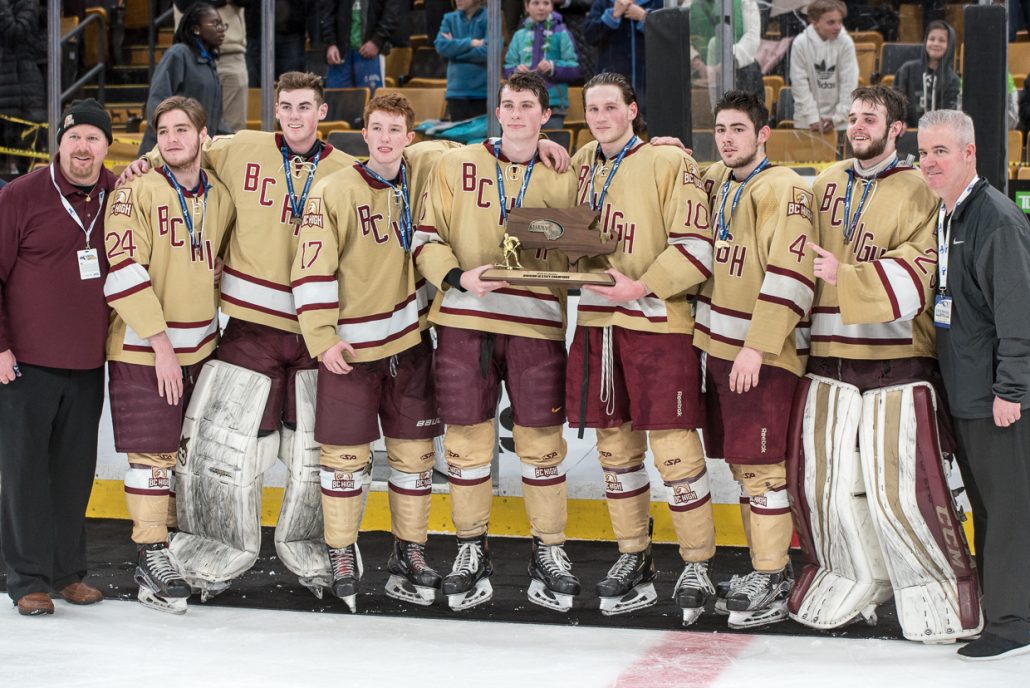 BC HIgh seniors with MIAA Division 1A championship trophy after epic 2-1 4OT win over Pope Francis.

You have heard that adage many times after a great sporting event: “It’s a shame that someone had to lose this game.”

That saying could not have been more true after last night’s MIAA Division 1A (Super 8) between BC High and Pope Francis.

In game that will be remembered for years to come, top-seeded BC High held on to its state title, outlasting the Cardinals 2-1 in four overtimes, easily the longest game in MIAA state final history. 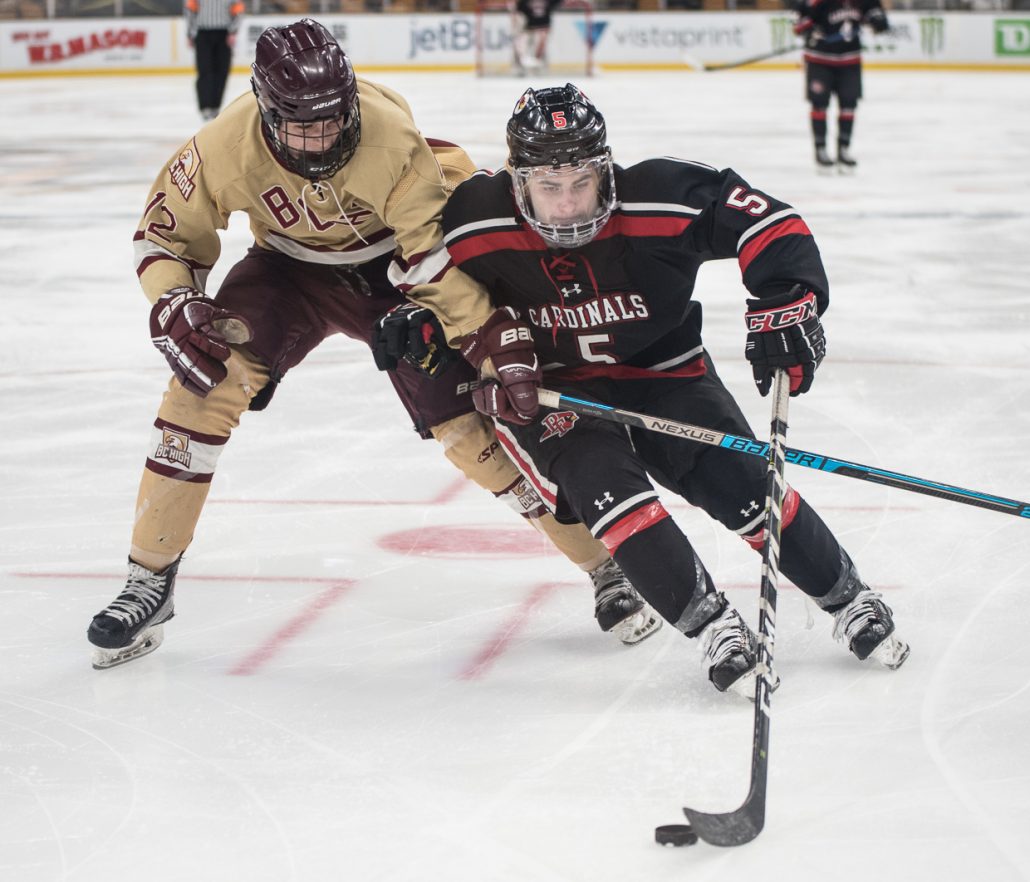 Freshman defenseman Declan Loughnane was the hero for the Eagles, depositing a wrist shot 6:22 into the fourth overtime session.

Last year, BC High won the 1A crown with a similar 2-1 overtime win over Pope Francis. In both games, the Cardinals were nursing a 1-0 lead late into the contest, only to see the Eagles tie it and send it to extra time.

“It’s not something we planned, but when you play this type of competition, this is what can happen,” said BC High coach John Flaherty. “I was happy with our perserverance, happy with the effort from our guys. Even through the overtimes, we never believed that it wouldn’t go our way. We talked between periods about believing, told the guys it would take just one shot to defend the title and be repeat champions.”

“That definitely was the best game that I have been a part of,” said Pope Francis coach Brian Foley. “It was a great heavyweight battle between two great teams. There is a lot of emotion in our room right now. When the pain subsides, it will be a fun game to remember.”

The overtime sessions were full of great scoring chances and even greater saves by goalies Chase Congdon of BC High and the Cardinals Ben Zaranek. The Eagles hit three crossbars, while Congdon made two unbelievable saves on bids by Pope Francis forward Makem Demers, one on a breakaway bid in the third overtime, and another with a great pad stop in overtime number  four.

The Cardinals (18-2-3) scored their only goal just 3:04 into the game on a power play. Matthew Burke had the puck on the left wing side. He went around the net and sent a quick feed in front to Cormac Hayes, who swiftly snapped it home. 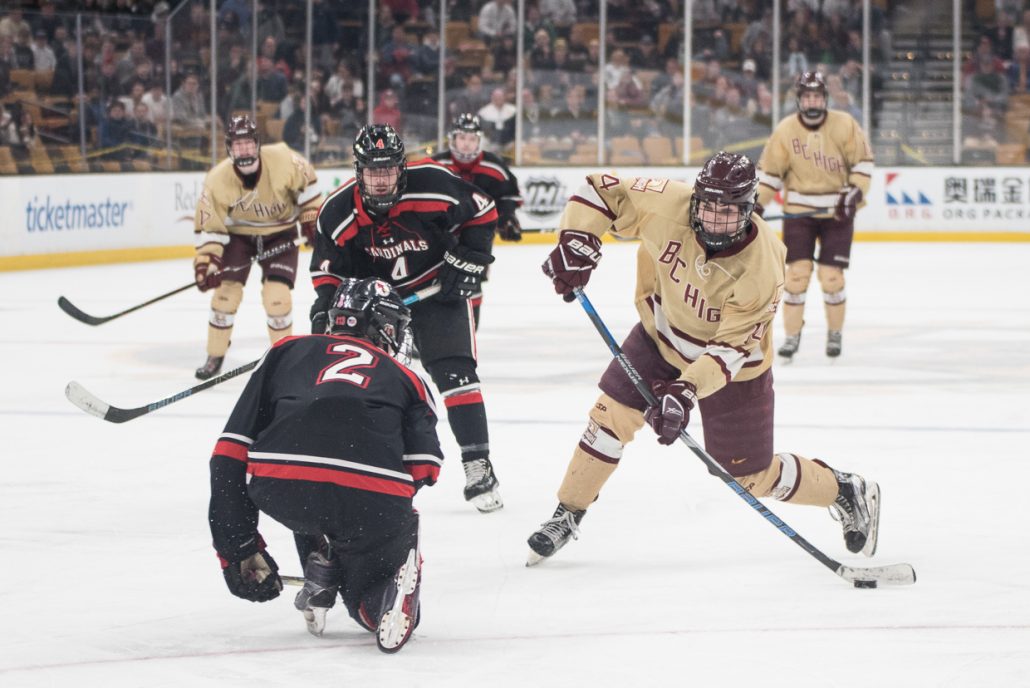 Pope Francis withstood an Eagles barrage in the second period and clung to that 1-0 lead as time ticked down. Then, with 1:35 to play BC High’s Thomas Kramer was hauled down driving to the net after a great rush into the zone, giving the Eagles a power play.

Flaherty elected to pull Congdon giving the Eagles a 6-on-4 advantage and it worked. Thomas Kramer found brother Joseph with a nice cross ice pass to the back side and Joseph one-timed it to the near side, tying it with 1:02 to go.

After a first 12-minute overtime session passed with no goals, the teams then played four-on-four the rest of the way.

“It was definitely a challenge,” Flaherty said. “With the forwards Pope Francis has, the more ice they have the more dangerous they are. We told the kids not to lose people, to have swivel heads, make sure you pick up your guys. If they were going to beat us, they would have to earn it.”

As word circulated in the TD Garden press area during the fourth overtime that this would be the last period and the possibility of co-champions existed, Loughnane took care of things. The gifted freshman skated into the Cardinals zone on the left wing, made a nice cut to the middle to get on his forehand and fired home a near-side wrister that beat Zaranek clean to give the Eagles a 2-1 win and back-to-back state titles.

“What can’t be lost with this group is that we lost 11 guys from last year’s team,” Flaherty said. “This isn’t a group of guys that had overall experience. These guys did it themselves. They dug in and got better every game all year long. There were guys who were around last year but didn’t play significant minutes that emerged this year and played big-time minutes. They made their own footprint.” 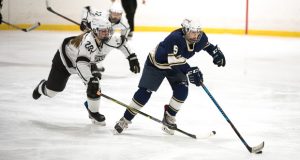